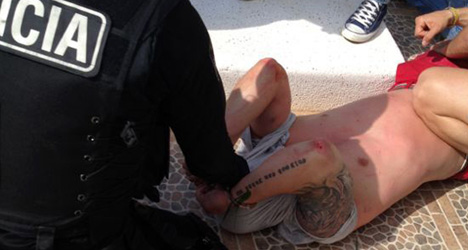 Armed officers found him relaxing by the swimming pool when they raided the villa in the town of Calpe on the Costa Blanca on Friday, Britain's Serious Organised Crime Agency (SOCA) said.

The 31-year-old absconded from his trial for armed robbery in Britain in 2009, assaulting a security guard and vaulting over the dock. He fled the country and was later convicted in his absence.

Spanish police said Moran, who they described as a "dangerous fugitive", had "attempted to flee and violently resisted the officers". Last November, he had evaded arrest by shaking off Spanish officers in a car chase.

Two handguns, 60 rounds of ammunition and a machete were found at the property in Calpe, a town popular with expatriates, SOCA said.

Moran, from Salford, near Manchester in north-western England, was on his country's most wanted list of criminals.

He was arrested in 2007 over the brutal robbery two years earlier of €30,000 from guards working for the Royal Mail postal service in nearby Colne, in Lancashire.

The guards were threatened with a handgun, machete and a baseball bat, and one of them was assaulted in the raid.

Moran's co-accused, Stephen Devalda, was arrested at a hotel in the Spanish resort of Marbella in 2011.

"Like his partner in crime Devalda and the other armed robbers on the (agency's) hit-list discovered, though, there's no hiding place."

The agency said Moran would be appearing in court in Madrid on Monday as proceedings begin to extradite him to Britain.