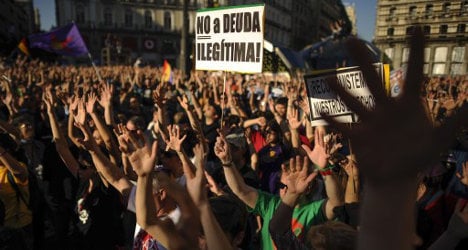 The "indignants", along with the Occupy Wall Street demonstrations in New York, spawned similar protests in hundreds of cities around the world. Photo: Pedro Armestre/AFP

The "indignados" demonstrators gathered in Madrid, Barcelona and in around 30 other Spanish cities in anger at the government's austerity measures.

At the Puerta del Sol central square in Madrid, protesters carried signs that read "The fight continues", "Together, it's possible" and "They call it a democracy but it's not".

They were due to hold a minute's silence later Sunday to mark "a silent cry".

The "indignants", along with the Occupy Wall Street demonstrations in New York, spawned similar protests in hundreds of cities around the world.

While some of Sunday's demonstrators waved republican flags, others wore T-shirts symbolising the mobilisation of the education sector which, much like the health sector, has been hit hard by the belt-tightening cuts.

"The government just does what Germany, the International Monetary Fund and the European Central Bank tell it to do," he said.

Prime Minister Mariano Rajoy's conservative government hopes to save €150 billion ($195 billion) by 2014 through the cuts in a bid to slash the public deficit.

The austerity measures, which include tax hikes and pay cuts for public sector workers, have fuelled anger in a country grappling with an unemployment rate which in April surged past 27 percent — a new record.

Some 6.2 million people of Spain's 45 million population are now jobless.

But despite the continuing dire economic situation, the movement has lost some of its force in the two years since its conception.

The movement "is no longer the same, it has changed form", 26-year-old unemployed teacher Madrid Irene de la Torre said, pointing to the movement's recent support to communities and in helping fight evictions over unpaid rent.