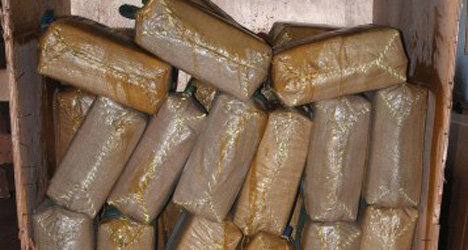 During the final police raid on a property in Elche, gang members attempted to flee in a vehicle in which officers discovered 322 kilos of hashish. Photo: HO/SPANISH POLICE/AFP

The joint investigation found that the drugs were purchased in Spain then transported and distributed in the United Kingdom, reported news agency EFE on Saturday.

Seven gang members were arrested in Elche, Alicante (cities near Valencia), and two in Britain.

A shotgun, a replica pistol and wrapping machines were discovered during raids on three premises.

The operation was instigated in January when police noted the presence in Spain of members of a British gang dedicated to buying drugs.

The purchases were later disguised and hidden inside electrical transformers to be transported to Britain.

Investigators swooped after uncovering an imminent plan to ship an indeterminate quantity of drugs.

During the final police raid on a property in Elche, gang members attempted to flee in a vehicle in which officers discovered 322 kilos of hashish.

The operation uncovered the existence of a number of other offences including illegal possession of firearms and the assault of a police officer.

Spanish authorities have placed six of the seven men arrested into custody.