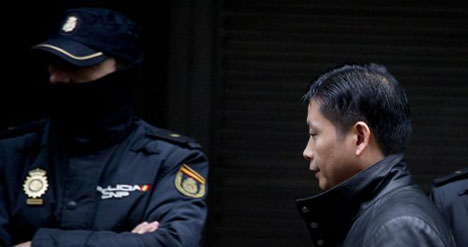 Chinese businessman Gao Ping was at the centre of a major raid last year in which scores of suspects were charged with money-laundering and other crimes. Photo: Dominique Faget/AFP

Officers arrested two Chinese nationals, one suspect from Hong Kong and three Moroccans in raids at locations including a major Chinese trading estate near Madrid, a police statement said.

The network sold hashish that was smuggled from Morocco to Spain, distributing it to Britain, France and other countries, and laundered the money via wholesale purchases of clothes and jewellery.

The police said they seized 21 million items of clothing worth more than €100 million ($131 million) as well as luxury cars and jewels and watches worth four million euros.

After catching drug-traffickers in December with 11 tonnes of hashish, police traced the gang's financial activities and discovered it was laundering €500,000 of drug money a week.

"The group that has been broken up was mainly composed of nationals from Morocco and China specialised in introducing the illicit money into the legal market," the statement said.

"To do so, they carried out a multitude of commercial transactions of clothing, deluxe watches, jewels and other goods."

Moroccan members of the network used the money in transactions involving suspects in the industrial estate of Cobo Calleja, considered the biggest Chinese wholesale hub in Europe.

The site was the centre of a major raid last year in which scores of suspects including a Chinese businessman, Gao Ping, were charged with money-laundering and other crimes.