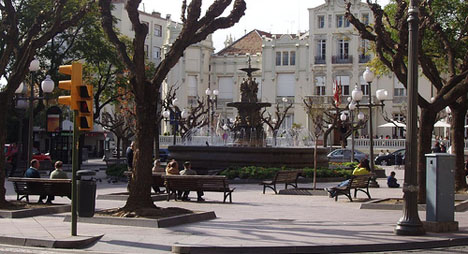 Huesca’s Navarra Square has turned into the main protest point in the city for hunger strikers. Photo: Fernand0/Flickr

Holistic doctor Ángel Borruel started the initiative, having already gone on hunger strike for forty days in protest against the Iraq war.

He forms part of the Hambre de Justicia platform (Hunger for Justice) which has 4 other permanent hunger strikers and 140 temporary ones.

“I’m on hunger strike not just for myself but for society as a whole,” Borruel told the Huffington Post.

“Why are we on this earth? To be economic pawns or to be ethical, civilized beings?”

Borruel told the Huffington Post that one in every thirty residents of Huesca had signed the petition and that workers’ unions and political groups  were showing their full support too.

Huesca’s Navarra Square has turned into the main protest point in the city, where people gather to debate how to tackle Spain’s labour and fiscal reforms, their right to a decent job and the country’s public debt.

One of those who is combining work with fasting is high-school teacher Elisa León.

“This is a national emergency,” she told the Huffington Post.

“Blanca, my daughter had to leave Spain after months without work. She’s now doing farmwork in England in exchange for bed and board.”

Sixty-five percent of young Spaniards say they are willing to go abroad to find work, according to a survey by jobs site Infojobs.