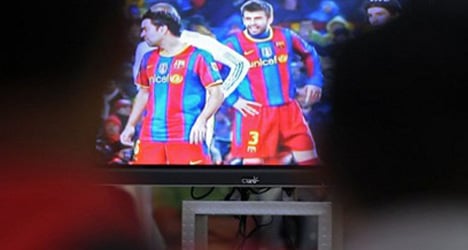 A televised Barcelona-Madrid game is reported to have ended in violence for a Vigo couple. Photo: AFP/Orlando Sierra

The Galician man appeared in court on Thursday charged with abusing his partner in a bar after a televised football match between FC Barcelona and Real Madrid.

La Voz De Galicia reports that the couple began to argue after watching the match on December 11th 2011, which Barcelona won by three goals to one.

Vigo criminal court heard that the man, who supports Barcelona, began to manhandle and shout at his Madrid-supporting girlfriend, causing the bar's owner to phone the police.

In their statement, officers claimed the accused was pushing and kicking the woman when they arrived.

The man is then said to have escaped through an open window in the rear of the premises before being apprehended.

He is reported to have insulted and strongly resisted the arresting officers.

The man contested the accusations but admitted resisting arrest, claiming that he panicked at the thought of spending the night at the police station.

He also stated he could not remember anything about the alleged assault but said, "I don't think I did it."

Despite their  differences of opinion, the couple are still together and share an apartment.

The woman, who did not press charges, was called as a witness but refused to make a statement.

The lawyer for the accused presented medical evidence that the man suffered from a personality disorder associated with alcohol and nicotine addiction.