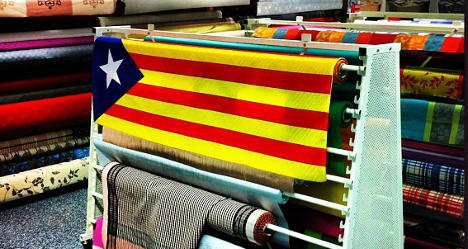 Spain's Constitutional Court now has five months to rule on whether Catalonia has a right to decide on the independence issue. File photo: Daniel García Peris

Catalonia's regional parliament in January passed a "declaration of sovereignty" which it said gave Catalonia grounds "to exercise its right to decide" its political future.

But the national government rejected efforts by Catalonia's leaders for greater independence, fanned by the economic crisis, and challenged the resolution as a threat to the "unity" of Spain guaranteed by the constitution.

The Constitutional Court in a written decision Wednesday agreed to hear the government's appeal, meaning the resolution is suspended under Spanish law until the court makes a final ruling.

The court now has five months to decide on whether the January declaration is constitutional.

The conservative leader of Catalonia's government and champion of the current drive for sovereignty, Artur Mas, called the decision "highly worrying and deeply disappointing".

But Mas came out on the front foot by saying: "The path continues, despite the obstacles.

He said the declaration of sovereignty had been taken by a "democratically elected" government with a clear mandate from voters.

The majority of PSC representatives in the Catalan parliament voted against January's declaration of sovereignty, although five of the party's delegates abstained from voting on the issue.

Catalonia, home to 7.5 million people and a major source of exports, has, during in the economic crisis, changing from being one of Spain's richest regions to its most indebted.

Mas was re-elected in November after calling a snap election in protest at Madrid's refusal to grant Catalonia greater tax powers. He has called for an independence referendum in 2014.

"This kind of decision calls into question the will of the people expressed in the ballots," Mas said of Wednesday's ruling.