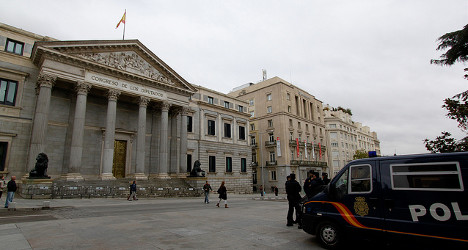 One of the members reached the frontal façade of the 19th century structure and attempted to display a banner saying “The Popular Party is selling off our coast”. Photo: Royluck/Flickr

The environmental activists used the scaffolding surrounding Madrid’s Congress to clamber up to the top of the building.

One of the members managed to make his way to the upper reaches of the 19th century structure and attempted to unfurl a banner saying “The Popular Party is selling off our coast”.

The conservative Popular Party are currently in power in Spain and have held a large majority in the country's parliament since general elections held in 2011.

Police were quick to climb up the Congress to arrest all eight Greenpeace members.

Congress President Jesús Posadas admitted there were “security flaws” and that it was not yet clear how the ecologists had managed to outwit security guards and police surrounding the building.

Meanwhile, Greenpeace are planning to take Spain’s newest coastal law to the European Commission in Brussels as a means of establishing if future building plans along Spain’s coast will damage vulnerable wetlands and dunes.

“All this law does is disregard and devalue our coasts. Instead of protecting them they are occupying them.”

Among the contested clauses in the law is one that extends leases of built-up coastal land to 75 years.

Environment Minister Miguel Arias Canete said that was to protect buildings built before 1988 from being demolished when leases expire.

It also reduces to 20 metres in some cases the protection zone that must be kept between buildings and the sea.

Greenpeace's coastal affairs spokeswoman Pilar Marcos said the law "sets us back 25 years in environmental protection" and panders to the "private interests" of property developers.

"It is the culmination of the barbarities of the building boom," she said in a statement.

The environmental spokesman for the opposition Socialists in parliament, Jose Luis Abalos, said the reform "puts an end to the most serious attempt ever made in Spain to protect our coasts".

He said that only 30 percent of Spain's coasts were not occupied by human activity.

The government, meanwhile, insisted the reform would protect Spain from a repeat of infamous projects such as the Algarrobico, a 21-story concrete hotel built in a national park on the southern coast.