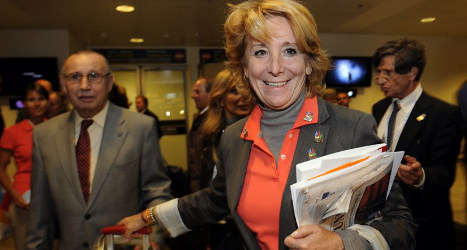 Who is Esperanza Aguirre?

A long-term member of Spain's ruling conservative Popular Party (PP), Aguirre is one of Spain's political survivors — quite literally.

Having walked away from a helicopter crash in 2005 — Spain's current Prime Minister Mariana Rajoy was also on board — Aguirre then emerged almost unscathed from terror attacks in Mumbai in 2008 which left 125 dead and a further 900 wounded.

"I didn't see any terrorists or weapons, only pools of blood, which I had to run through barefoot," said the politician at the time.

Aguirre then went on to experience a very different kind of battle: in 2011 she survived a fight with breast cancer.

Aguirre is no shrinking violet and has never shied from taking potshots at her left-wing opponents in Spain.

"When the (opposition Socialist) PSOE (party) come through the door, jobs fly out the window," said Aguirre to Spain's La Razón newspaper in another such stinging attack.

"We need to get rid of these (state) subsidies, grants and cushy jobs," she told news agency Europe Press in 2009.

Given her sharp tongue and strong views, it's not surprising Aguirre inspires strong feelings. On Wednesday, columnist with the newspaper El País  Antonio Elorza described her as Spain's "homegrown caricature of Thatcher".

But Peruvian-Spanish author Mario Vargas Llosa once described her in the same paper as the Joan of Arc of Spanish liberalism, praising her "dual combat" against "a dogmatic left" and a right "with more (financial) interests than principles".

Her most recent leadership post was in the plum role of President of Madrid, a job she held from 2001 to 2012.

In September last year, however, this speaker of fluent French and English — she studied at the British Council School of Madrid — called a press conference and made the surprise announcement that she was stepping aside.

In a tearful farewell, she said that her recent fight with breast cancer was "among the reasons" for her resignation as the capital's president.

"I've never felt myself to be indispensable, and even less so now," she said referring to the conservative PP's stranglehold on Madrid politics.

She went on to thank her political colleagues and adversaries alike for their "criticisms, jibes and, in many cases, friendship".

Aguirre's prior ascent up the political ladder had been steady. After studying law, she began her career as a civil servant before moving into local politics in Madrid in the 1980s.

In 1996, this Spanish aristocrat — she holds the tile of Countess of Murillo — stood as a senate candidate for Madrid in Spain's general elections.

Having won the vote, she was then appointed Minister of Education, Culture and Sports by Spain's then-president José María Aznar.

In 1999, Aguirre was appointed President of the Senate, a role she held until she became President of Madrid.

I'm guessing Aguirre hasn't quietly sailed off into the sunset?

Not exactly. In January 2013, a matter of months after leaving the Madrid leadership role, she signed on as a headhunter for the firm Seeliger y Conde.

Aguirre also remains the president of the Madrid branch of the PP and still has her political eye in.

On Thursday, she attended a homage to Cuban dissident and opposition leader Oswaldo Payá and defied a group of young pro-Castro students by repeatedly calling out "Viva Cuba Libre".

"It's amazing that Fidel needed a doctor from Madrid's Gregorio Marañón hospital to cure him," El País newspaper reported Aguirre as saying to the protesters.

But it's Aguirre's role as the political conscience of Spanish Prime Minister Mariano Rajoy that has kept her in the headlines lately.

Rajoy — caught between a rock and a hard place as he tries to appease both the European Union and a Spanish public made uneasy by his government's spending cuts — has recently backed down on austerity.

Recently he announced that Spain would extend its deficit-trimming deadline by two years to 2016.

While many of his pro-austerity party colleagues publicly backed their leader, it was Aguirre who jumped in to remind him of what she considers his electoral obligations.

She reminded Rajoy that voters had elected him on an austerity ticket and said cost cutting would require "a radical reform of (Spain's) public administration.

Aguirre wrote: "Now is the time to do this. Reduce the size of the public sector so that Spanish families and businesses can use it to get Spain out of the crisis."

The scuffle between Aguirre and the inner circle of the PP has spread over into the area of taxes as well.

When Rajoy explained recently to the party leadership that his government had been forced to raise taxes in 2012 to prevent "a crack" in Spain, Aguirre continued to be a thorn in his side.

On Tuesday, Aguirre told radio station COPE: "The PP's problem is not one of communication, but one of the convictions of the Finance Minister (Cristóbal Montoro)."

"We have to lower taxes," she told listeners.

Aguirre may have stepped aside from a leadership role, but she continues to play a key part in the inner workings of Spain's government. 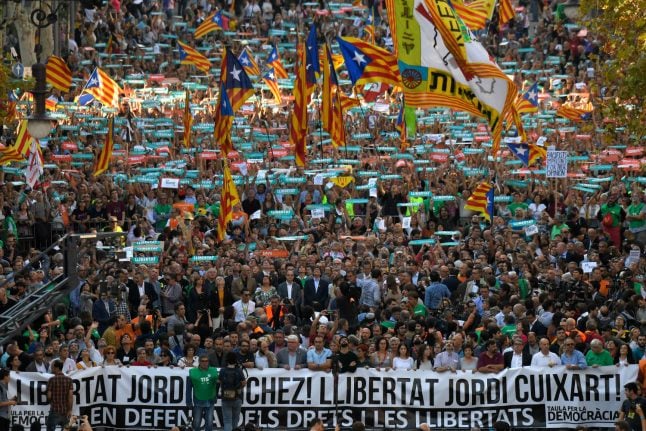