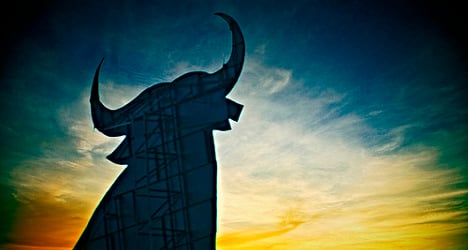 One of Spain's roadside bull signs originally designed to advertise Osborne sherry: the bull is an unofficial emblem of Spain. Photo: Tomas Fano

This coverage reached a devastating peak in September 2012 when the New York Times published an article titled ‘Spain recoils as its hungry forage trash cans for a next meal’.

The high-profile newspaper cited figures showing that the Catholic Charity Caritas had fed “one million hungry Spaniards” in 2010.

More harmful for Spain, however, were the gritty black and white photographs that accompanied the piece. These showed a country on the brink of disaster.

"Nobody wants to be like Spain now. Spain is only good for flamenco and red wine," Richard Boucher, the deputy secretary general of the Organization of Economic Cooperation and Development (OECD), said in early 2012.

In the same year, Spain slipped from 14th place to 19th place in the rankings put together by brand consultancy Futurebrand.

Spain’s scores for survey factors including ‘Job Opportunities’, ‘Most Like to Live In' and ‘Standard of Living’ had all dropped since 2010 when FutureBrand listed Spain as the 10th strongest country brand in the world.

In 1996, during the days of the so-called 'Spanish miracle', only ten percent of Germans mistrusted the Spanish. But this figure now stands at 50 percent.

Germans are also now much more likely to call Spaniards lazy. Back in the mid-1990s, two out of every ten German thought Spaniards didn't work much. Now that figure has doubled so that four out of ten Germans believe Spaniards to be lazy.

The Spanish government are not taking this criticism lying down though: The ruling Popular Party led by Prime Minister Mariano Rajoy has set up an agency to improve the reputation of the country.

Established in July 2012, Brand Spain (or Marca España) hopes to scrub up Spain’s image in the eyes of the rest of the world. The organization believes this will help increase the country’s exports as well as attract foreign investment to Spain.

The top man at Brand Spain is Carlos Espinosa de los Monteros. In April, he told the Financial Times that the damage to Spain’s image was affecting business.

“Most Spanish executives who work for multinationals or banks have noticed that they now are a bit under suspicion,” Espinosa told the business daily.

“They find that lenders don’t have the same degree of confidence that they used to have. And if they want to expand their activities in Spain, they find opposition.”

Espinosa was also keen to stress that the international press was overstating the problems in Spain.

“How many times have we had to read that Spain is going to collapse? We committed mistakes, we over-invested, and we over-built. But this is not a country that is going to become the poor brother of Europe.”

In the last few months, Marca España has become something of a catch cry in Spain.

On May 1st, for example, the Employment and Economy minister for Castile–La Mancha called on businesses, governments and media outlets to speak positively about the country and about “Brand Spain”

Casero said it was important that “we all speak positively about our country” and that Spain projected an image of solvency and seriousness that could be trusted.

But the international press continues to report that old habits are hard to break. On Saturday, the New York Times published a front page feature on corruption in the village of La Muela in northern Spain.

The paper described how a former mayor of the village, María Victoria Pinilla, is facing charges of embezzling some €24 million during Spain’s building boom.

The New York daily then listed the corruption scandals affecting Spain including that involving the King’s son-in-law Iñaki Urdangarin and his alleged diversion of funds from a charity sports institute.

“Spain is by no means Europe’s most corrupt nation — Greece and Italy are considered more so,” wrote the New York Times.

“But the sheer volume of political corruption cases here is proving deeply embarrassing.”

This could be the sticking point. Although Brand Spain is intent on improving the country’s image, it can be difficult to see past all the problems currently facing the country.

“The Marca España — that thing that was created in a night of passion between a political adviser and a marketing consultant — has been tainted for a long time,” the Financial Times quoted columnist Elvira Lindo as saying in the El País on Sunday.

“As they say in marketing: one cannot sell what one does not believe in.”

"What needs fixing is not the country's image, but its real problems; with what is happening here, it's difficult to go abroad and change perceptions," Miguel Otero, director of the Leading Brands of Spain Forum told El País in 2012.