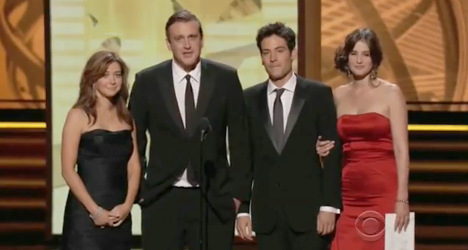 Cast members of How I Met you Mother collect an Emmy Award for best comedy writing in a television series in 2009. Photo: YouTube

The final episode of the eighth season of the top-rating show once again saw the US entertainment industry getting it wrong with all things Spanish, reported 20minutos on Wednesday.

In the episode, the character Ted Mosby — played by Josh Radnor — looks back on a trip to Spain. Behind him is a map which has the Spanish cities of Barcelona and Seville in the wrong spots.

Meanwhile, Valencia is misspelt as Valencenia and Merida, about 330km south west of Madrid but definitely within Spain, appears stranded in Portuguese territory.

During the episode, Ted Mosby also runs into a (Mexican) mariachi band and dances an (Argentinian) tango with a woman dressed in the traditional costume of Seville.

Other US shows to include Spanish "bloopers" include the 1980s hit detective show MacGyver and the A-Team, an action comedy series from the same decade.

An infamous A-Team episode portrayed Madrid's Barajas Airport with a sand runway and an army of Mexican workers.

More recently, the 2010 film Knight and Day showed the famous San Fermin — or running of the bulls — festival taking place in the southern Spanish city of Seville rather than in the northern city of Pamplona.

In Spain's Easter Week processions, images of Jesus and the Virgin Mary are paraded through the streets. The Las Fallas festival concludes with a huge bonfire in which floats, generally satirical in nature, are destroyed.