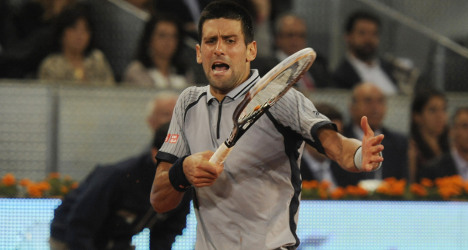 Djokovic may have aggravated a pre-existing ankle injury during last night's match against the Bulgarian Grigor Dimitrov. Photo: Dominique Faget/AFP

Djokovic had recovered from rolling the injured right ankle whilst playing for Serbia against the USA on Davis Cup action last month to claim his first title in the Monte Carlo Masters a fortnight ago.

However, he said he did not know whether he would even take part in the Spanish capital until Saturday, although he also acknowledged that he had been beating by the better player on the evening.

"I didn't prepare myself so well, but, look I'm not trying to find any excuses for the loss. I tried to do my best in this moment, and maybe my best is not like it was in Monte Carlo.

"All the credit also to Dimitrov, because he was the better player on the court. He was striking the ball really well, serving great, changing the pace, and, yeah, he deserved to win, as I said.

"For 12 days after Monte Carlo I haven't touched the racquet. I didn't know up to Saturday if I'm going to come here or not because of the ankle."

Djokovic even appeared to further aggravate the injury when he twisted the same ankle when trailing 2-4 in the second set, but he doesn't believe the damage will affect his preparations for the Rome Masters next week before heading to the French Open at the end of the month.

"Luckily for me nothing really happened when I twisted the ankle during the match. It was a slight moment. I had good protection on my ankle.

"So right now the only positive thing that I look into, is that I didn't injure my ankle worse before Rome and Paris."

The Australian Open champion though was left far from happy as he thought he had won the first set when Dimitrov fired long when set point down at 4-5.

However, the call was overturned and from then on the crowd seemed to turn against Djokovic, much to his confusion.

"I don't want to discuss those calls. The balls were really, really close. I thought it was out, but, okay. You know, it's chair umpire's decision in the end, and I respect that.

"In the first set, every single close call that I went to look at the ball and the chair umpire comes to see, I got whistled. I don't see any reason for that. I didn't do anything bad.

"When I see the ball, it's good, I clear the mark. I give him a point. I never did anything opposite in my life. I'm honest. If I see the ball in, I play the ball; if it's close, I call the chair umpire.

"I don't understand why they turn against me, for what reason, but it is what it is. I'm a professional, and it's not the first time I'm experiencing that."

Dimitrov, meanwhile, was obviously delighted with the biggest win of his career to date.

"It was a great experience for me today. Obviously I played him a couple of times before, so I kind of wanted to do something else and try some new stuff on court, and that was it.

"Of course he's the No. 1 and of course it's a great feeling, but it's just the beginning of the tournament. It was just second round if you think about it, so you've just got to get ready for the next matches and make sure that you can do that again.

"Today was one of these days that I felt good on court. I felt I had enough hours of practice in the weeks before. I felt that I could actually hang with Novak the whole match.

"That's the whole purpose of getting ready for big events and eventually for big matches."