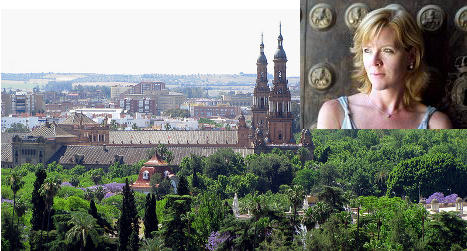 Maritheresa Frain thinks young Spaniards are more open to going abroad to work than ever before.

So Maritheresa, why the Spanish-sounding name?

My mother liked it, she must have thought it sounded original. It’s worked out quite well now that I’m living in Spain.

Tell us a bit about yourself.

I’m originally from Philadelphia but I've lived in Portugal, Greece, Russia, Switzerland and Spain. I've got a PhD in International Relations from Georgetown University and I’m a qualified political scientist academic.

Sounds like you've lived a very busy life. What made you settle in Spain?

My husband and I wanted to settle down somewhere that we both liked and where we could also find work. We’d already lived in Madrid but we always said we’d like to return to Spain and live in Seville. It’s been 13 years now.

How did you start working for the American consulate in Seville?

I started working for them four years ago, but I've started counting in dog years now because there’s so much to do and so much going on. It’s not a full time post but I handle everything from passport validation to birth certificates.

My main responsibility, however, is to deal with US nationals incarcerated in the region. I visit them, make sure they are being treated fairly and ensure that Spanish legislation is being carried out properly to meet their needs.

You have another job keeping you very busy too I believe.

I’m the director of CIEE Spain, the Council for International Educational Exchange based here in Seville. We’re a long-standing non-profit organization that helps thousands of young people study abroad every year. The whole organization is responsible for running  170 programmes in 60 different countries.

Spain accounts for 30 percent of our workload, with over 3,000 American students coming here every year.

Why Spain when Latin America is so much closer?

For a number of reasons. The average student embarking on one of our Spain programmes is 20-21 years of age. Their objective is usually to become fluent in Castilian Spanish but they also see it as a stepping stone in ‘doing Europe’.

There’s also the appeal of the old world, the chance to get to learn first-hand about old Spanish stereotypes like flamenco and bullfighting.

South America also seems to get pretty bad press in the US media, so many parents are put off by the prospect of sending their kids to somewhere dangerous.

Are work practices in CIEE's office in Seville more Spanish or American?

We speak Spanish rather than English in the office but we've had to ditch some of the traditional work habits you get over here.

When I first started working for CIEE the working day was split in two: 9am to 2pm and 4pm to 7pm. I thought to myself: “This is ridiculous! We’re losing out on quality of life and time with our families!” So we now do nine to five with a half hour lunch break and none of the 11am breakfast that also wastes time.

Hiring and firing can also be a big challenge. If someone’s not performing and it’s having a negative effect on our teamwork, it’s not that easy to see them go. Spanish judges will usually rule in favour of the underperforming employee even if there’s a valid cause to sack them.

So you have to be very careful with who you pick for a job because firing them can result in a major blow to your budget.

What changes have you seen in Spain since you first arrived?

I first came to study here in 1982 and people’s attitudes have changed a lot, especially among young people. Here in Andalusia people would never want to leave their family and friends. They were also reluctant to learn other languages or look for work abroad.

Nowadays it’s a whole different story – youngsters are better at languages and they know that if the opportunity to find work in Madrid, Germany or anywhere else crops up, they have to take it!

What about Americans in Spain? Do you think the trend of US expats who work en negro (without paying taxes) still exists?

Not anymore. The Spanish authorities are clamping down on tax evaders and rightly so. A lot of Americans may see it as a bit invasive but the same is happening in the States and it seems to be the right move for Spain with everything that’s happening.

What would you say to any fellow Americans planning to make the move to Spain?

In terms of quality of life, it doesn't get much better than this. My husband and I tend to idealize the US sometimes because of the size of the houses, salaries, education and so on.

But what you get here is so much better. Everything is so much closer like shops, mountains and the beach. You don’t need a car and if you do need to get somewhere far public transport is great.

I’d tell anyone who has a job before they've landed to really go for it. Make sure you learn the language and really immerse yourself in the culture and its people. It’s very enriching and definitely worth it.