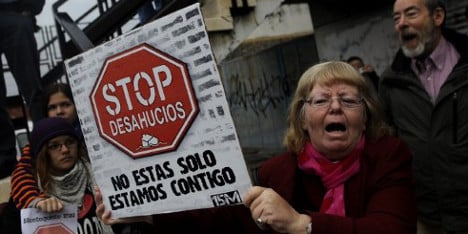 Activists often block the entrance to homes of people about to be evicted to prevent police from forcibly removing them from their homes. Photo: Cristina Quicler

The 40-year-old's body was found by a bailiff who went to the apartment to carry out the eviction, the High Court of Catalonia which issued the eviction notice said in a statement.

Police have opened an investigation into the man's death, a police spokesman said.

"Everything seems to indicate that it was a suicide," he added.

The man was facing eviction because he had fallen behind on his rent payments.

A series of suicides by people about to be evicted and regular television images of weeping families who have just been thrown from their homes has pushed the issue to the top of the political agenda.

It has also sparked a protest movement which enjoys widespread support from the public.

Activists are often seen blocking the entrance to homes of people about to be evicted in order to prevent police from forcibly removing them from their homes.

Spain's lower house of parliament approved a new mortgage law which makes it easier for those with payment difficulties to keep their homes.

But critics say it does not go far enough with campaigners demanding debts by defaulters to be erased if they turn in the keys to their home.

Under Spanish law most people still have to pay off their mortgage debt even after eviction.

The law will be put to a vote in Spain´s Senate on Wednesday.