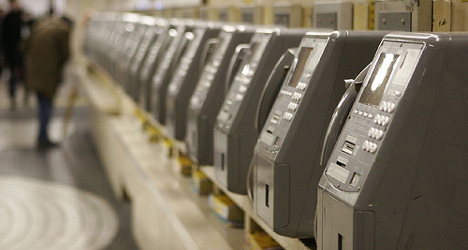 There are more bacteria on shared phones than in toilets, research carried out in the UK in 2011 revealed. File photo: Mr Hayata/Flickr

A study into the hygiene of Madrid's public telephones has found that 95 percent are contaminated with bacteria, Spain's ABC newspaper reported on Tuesday.

The research by Spanish company a64 looked at 40 shared and public telephones in Madrid. The firm collected 130 samples and tested these in three different microbiology laboratories.

Testing by a64 showed that 30 percent of these phones were positive for the E.Coli bacteria. The most common microorganisms found, meanwhile, were aerobic mesophilic bacteria, which grow in conditions that are neither too hot nor too cold and are found in yoghurt and cheese.

Ten of the telephones tested in Madrid were located in 10 four- and five-star hotels. Others were situated in public call centres, at Madrid's Atocha train station and the capital's Barajas Airport.

The remainder of the telephones were public phones on Madrid's streets.

A study carried out by Queen Mary, University of London in 2011 found that there were more bacteria on telephones than on shoes or in toilets.

That study found that one in six mobile phones in the United Kingdom was contaminated with fecal matter in the form of the E.Coli bacteria.