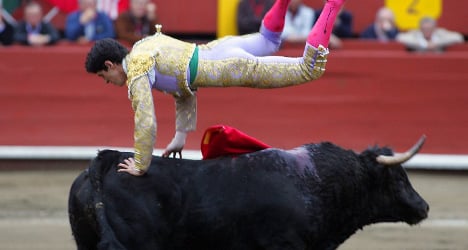 Alejandro Talavante is tossed by a bull at a bullfight in Lima, Peru. File photo: Eitan Abramovich/AFP

In the atmospheric video designed promote his presence at a bullfight in which he will fight six bulls from the legendary Victorino stud farm, Alejandro Talavante appears as a soulful figure wandering the streets of a Madrid.

The black and white video — the first such act of self-promotion in the generally traditional world of Spanish bullfighting — comprises footage of the handsome bullfighter interspersed with that of a bull prancing around the ring.

"I want to ask you a question," begins the narrator of the high-quality promotional video funded entirely out of the bullfighter's own funds. "What happens in the heart of someone who lives alone among many, but who is the contemporary of everyone?'

The camera zooms in on the face of the 26-year-old Talavante as the narrator continues: "Different — somebody for whom scars are not wounds and for whom danger is not an enemy"

At the conclusion of the video, we see Talavante practicing a series of passes with a bullfighter's cape high on the upper floors of a Madrid skyscraper.

"The Rolling Stones or U2 don't stop advertising just because all their tickets are sold out," said Talavante speaking to El Pais newspaper about the video.

"It's not about convincing people who are already coming to the bullring. I want everyone to know what is happening that night."

When asked if he was worried that other bullfighters might follow suite and start producing their own videos, Talavante said: "It would be very positive. We have to transcend borders and make contact with society".

El Pais said that the torero preferred not to reveal the costs of the video. "Of course it was a considerable investment but what I want is for the results to reflect that investment. Everything else is secondary."