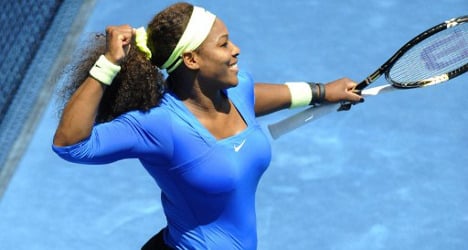 Putintseva had come through two rounds of qualifying and seemed to handle the warm conditions better early on in an extremely tight first set.

Both women broke each other once and Putintseva managed to save another three break points to force the set into a tie-break.

However, the world number 88 finally crumbled at 5-4 in the tie-break as she fired long and Williams served out the set before taking control in the second, breaking four times to close out the match.

"I felt a little sluggish at the beginning, but happily I was able to win," said the 15-time Grand Slam winner.

"I know I will need to play better as each match goes on."

Williams believes the warm conditions in the Spanish capital should be to her advantage as the tournament progresses.

"I have been training in Europe for a little more than a week, but long enough. I trained in Paris for a few days and then I came here.

"I think these clay courts are really good, they are a little bit quick which is really good for me and it's also a lot warmer here so overall its really good."

China's world number five Li Na, the 2011 French Open champion, was the biggest name to fall when she was taken apart by American Madison Keys 6-3, 6-2.

Keys had only got into the tournament as a lucky loser thanks to the withdrawal of Tamira Paszek after being beaten by compatriot Bethanie Mattek-Sands in the qualifiers.

But she dominated from the off with her heavy groundstrokes producing a series of errors from the Chinese.

World number 10 Caroline Wozniacki was the other major name to be eliminated as the former world number one was beaten in straight sets by Yaroslava Shvedova of Kazakhstan, 6-2, 6-4.

Venus Williams was forced to pull out of the tournament with a back injury.

The world number 21 had been due to open play on the main showcourt against Spain's Anabel Medina Garrigues.

"I was desperate to play in the Madrid Open this year, but unfortunately due to the pain in my back I cannot compete," she said in a statement.

Eighth seed Petra Kvitova was forced to go the distance against Yanina Wickmayer.

The world number 36 took the first set 6-4, but former Wimbledon champion Kvitova bounced back to take the next two sets 7-5, 6-4.

Agnieszka Radwanska, the fourth seed, had a comfortable afternoon as she saw off Tsvetana Pironkova 6-2, 6-4 to set up a meeting with Britain's Laura Robson and Marion Bartoli is also safely through after her opponent Elena Vesnina retired with the score 6-3, 3-0 in the Frenchwoman's favour.

In the men's tournament,16th seed Gilles Simon stayed on course for a potential third round meeting with Andy Murray as he came from a set down to beat compatriot Julien Benneteau 2-6, 7-5, 6-3.

And home favourite Fernando Verdasco set-up a second round meeting with Milos Raonic or Nikolay Davydenko as he overcame Belgian David Goffin 7-6 (7/2), 6-2.