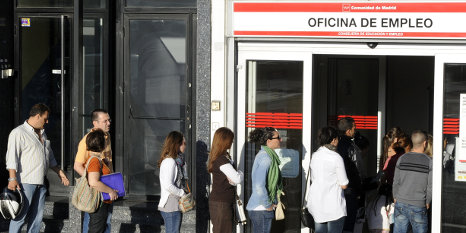 The number of job seekers registered as unemployed in April fell from the previous month by 46,050 people, or 0.91 percent, dipping below the five-million mark to 4.989 million, according to the figures released in a monthly report by the Labour Ministry.

Compared to the same month last year, however, the total number of people registered as unemployed was up by 244,958, or 5.16 percent, the data showed.

"We are about to complete a year of monthly registered unemployed figures better than those of the same month the previous year," said State Employment Secretary Engracia Hidalgo, arguing that the pace of year-on-year job losses had eased.

"The government will continue to work to achieve its goal of braking the destruction of employment."

Once the figures are corrected for seasonal variations, the number of people registered as unemployed actually rose by 17,663 from the previous month to 4.876 million in April, the report showed.

Spain's official unemployment rate shot to a record 27.16 percent in the first quarter of 2013, the highest level since the re-birth of Spanish democracy after the death of General Francisco Franco in 1975, according to a broader, quarterly household survey conducted by the National Statistics Institute.

Rajoy's conservative government, which took office in December 2011 after a landslide general election victory on the back of promises to create jobs, is forecasting the jobless rate will ease to to 26.7 percent over 2014 and ease back further to 25 percent in 2015.

Spain, with the eurozone's fourth-largest economy, is still struggling to overcome the aftermath of a property bubble that imploded in 2008, is expected to shrink by 1.3 percent in 2013 before posting modest growth of 0.5 percent in 2014, the government says.