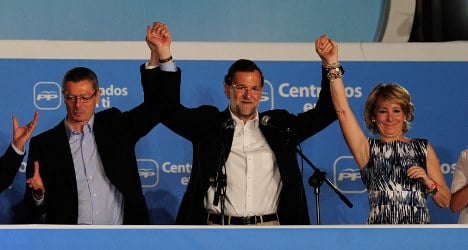 Leading figures within Spain's Popular Party (PP) defended Rajoy on Thursday after the influential president of the Madrid wing of the party, Esperanza Aguirre, said the country to ramp up austerity measures.

On Friday April 26th, Rajoy admitted it would probably take until 2016 to bring the country's public deficit — a crucial measure of financial stability — under the European Union's three-percent limit.

But Aguirre criticized this delay, writing in her blog on Tuesday that the government now needed to pursue the policies it had been voted in on and ensure "a reduction of costs" took place.

The influential official wrote this cost cutting would require "a radical reform of (Spain's) public administration".

She stated: "Now is the time to do this. Reduce the size of the public sector so that Spanish families and businesses can use it to get Spain out of the crisis."

On Thursday, however,  leading figures within the party came out to show their support for Rajoy's revised deficit targets.

The president of the regional Galician government Alberto Núñez Feijóo went on the front foot by pinning the country's deficit delay on the poor economic management of the former socialist government of Spain.

"The difference between Spain currently and the electoral program of the PP is the €90 billion in 'secret' deficit that the government found when it arrived in office," said Feijóo.

He said this was why Spain had needed to revise its deficit targets.

The minister for Justice Alberto Ruiz-Gallardón, meanwhile, was cited in El País newspaper as saying: "I support the government of the nation and the policy we are pursuing as well as Mariano Rajoy, naturally."

He also said he was convinced "Spain's citizens valued the extraordinary work and the results achieved" by the government".

In similar news, the leader of the PP in Catalonia, Alicia Sánchez-Camacho, argued: "Rajoy made sure Spain didn't need to be rescued". She also said that Aguirre had "her own voice" and that this wasn't the same as that of the party leadership.

However, the PP's vice-secretary for Studies and Programmes, Esteban González Pons, had a slightly different take on the issue.

Pons argued that Aguirre was merely stating the PP's original intention and that there had been no backtrack on cost-cutting.

"Everyone within the PP believes it is necessary to reform the administration," argued Pons.

Pons highlighted the fact that the government had already scrapped 370,000 public service jobs in 2012 and that ministries had seen a 20 percent reduction in their budgets.

He went on to say the government had created a study group which would examine ways to save another €8 billion in 2014 and 2015.