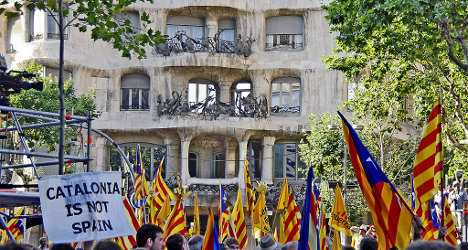 Thirty-seven percent of people in Catalonia are in favour of Spain's regions being able to make up their own mind when it comes to independence, a new study by the research group CIS reveals.

The pollsters investigated attitudes to Spain's system of autonomous provinces and found that 66.6 percent of people want Catalonia to have greater autonomy, 20minutos reported on Monday.

Meanwhile, just over one in five people in Catalonia (20.2 percent) said all of the country's regions should have a higher level of autonomy.

For the Basque country, just over half of CIS respondents said the region should have greater autonomy and 25.7 percent of people said they thought of all Spain's regions should enjoy more say in how they are run.

Meanwhile, 41 percent of people in the region thought there should be no change in the level of autonomy the Basque Country enjoyed.

The research carried out from September to December 2012 shows that the number of Catalans in favour of regions deciding for themselves on the question of independence was up from 6.6 percent from the January–March 2012.

Importantly, the percentage of Catalans who were happy with the region's current level of autonomy slumped from 42.3 percent to 16.7 percent.

The latest CIS research into Catalonian and Basque attitudes was published alongside the group's April Barometer.

That research found that 44.7 of Spaniards rated the current system of autonomous regions as "average" while 32.7 percent of people rated it as either "bad" or "very bad".

Just over half of Spanish people (55.3 percent) said they felt "just as Spanish" as they did a citizen of their own community.

Only 59.8 percent of people interviewed said they identified with Spain as "my country".