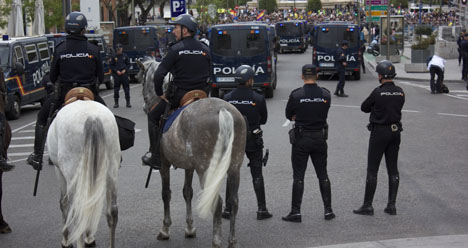 Police Union SUP has asked Spain’s general directorate of police not to go forward with the motion, alleging that its “militaristic nature” does not apply to the police force.

The resolution, not yet approved by Spain’s main policing body, has been drafted in a bid to improved uniformity within the squad.

But SUP has argued that “at your service” greetings apply only to the army and have suggested “good morning or good afternoon, sir” as more appropriate salutations for the police force.

Spain’s police directorate has also drawn up clauses that prevent male officers from having hair long enough to cover the ears completely, or part of their shirt collar and combat jacket.

The police document also states: “in the case of beards, moustaches, goatees and sideburns, they will have to be well-groomed and cut. For security reasons, the beard or goatee must not cover the knot of the tie”

Female police officers would only be able to wear earrings when at full dress uniform occasions and as long as the jewellery is no bigger than their earlobes.

SUP have asked for the whole section on uniformity to be scrapped, arguing that “the police are a totally civilian grouping with no military character.”

“Policemen don’t need anyone to tell them how to dress or style their hair,” the union said.