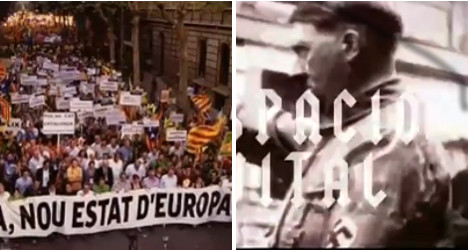 The programme on the public broadcaster Telemadrid implied Catalan nationalists used the same brainwashing methods as the Nazis in Germany. Photo: Telemadrid

The video, aired as part of the public broadcaster's Zoom programme, shows language experts exploring the theme of "language perversion".

It begins with footage of the Soviet dictator Joseph Stalin and the Nazi leader of Germany Adolf Hitler before transitioning to images of the president of the Spanish region of Catalonia Arturo Mas.

"Stalin created propaganda and then the Nazis perfected it,"  the news story begins. "Now it has become even more powerful without many of us even being conscious of the fact. It is the perversion of language."

The segment then highlights the way Catalan and Basque nationalists are "perverting" the Spanish language for their own means.

Zoom takes the Catalans to task first, decrying the use of terms such as "derecho a decidir" (the right to decide), "consulta" (consultation) and "autoderminación (or self-determination).

Viewers are then told that the two major pro-indepedence parties in Catalonia — the CiU and the ERC — want to open a debate on sovereignty for the region. The narrator then states: "What they really want though is rupture".

These words are played over images of frightening hooded figures waving Catalan flags.

"For people who want to hide something, language is a great weapon for manipulating (people)," the head of the Department of Language of King Juan Carlos University Fernando Vilches tells the program.

"We have forgotten that language is supposed to unify, and not divide," says Vilches while footage of Catalan books laid out on a table is shown.

The segment's host then states that pro-independence Catalonians have chosen to use the term 'normalización lingüistica' (linguistic normalization) instead of what they really mean — "the imposition of the Catalan language".

Cristina Ortega then tells viewers that "changing the meaning of words is a strategy common in totalitarian regimes".

"We need to call a spade a spade," Ortega says as she hold up a copy of the RAE dictionary, the official dictionary of Spain's national language society.

The final section of the short segment focuses on Basque nationalism with Ortega saying that the term "jailed murderer" should be used instead of "political prisoner" and that "ETA gunmen" is to be favoured over "military apparatus".

Click here to watch the full three-minute video (in Spanish).