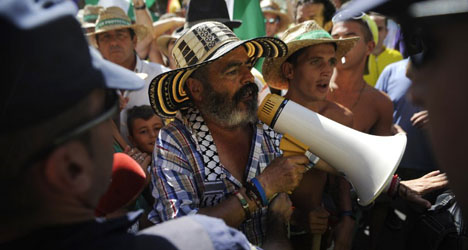 Who is this Gordillo guy?

He’s the no-nonsense United Left politician who on Wednesday reoccupied military land in Seville in a bid to set up a cooperative that he claims will provide work to more than 100 families.

Sounds like a bit of a loose cannon. Tell me more about him.

Gordillo made international headlines last year when he organized Robin Hood-style raids in supermarkets to gather food for impoverished families.

"The crisis has a face and a name, he told reporter Dan Hancox of the UK newspaper The Guardian. “There are many families who can't afford to eat."

Mayor of the small Andalusian town of Marinaleda, Gordillo speaks out openly against capitalism and has set up what many journalists have called “a communist utopia” in the rural settlement.

A communist village in Andalusia?

That’s right. Marinaleda has a population of 2,600 and virtually everyone has a full-time job. Land is owned communally and wages are kept equal.

Since the Karl Marx lookalike put the communist style of governance in place, the villagers have built 350 family homes with their own hands.

Mortgage payments are just €15 a month, according to Spanish newspaper El País, and no profits can be made from reselling the houses.

How did he come up with the idea?

Gordillo was born in Marinaleda in 1949, back when the village was made up mainly of rural workers paid by the day ,or jornaleros as they are known in Spain.

"It was a village of migrants,” he told news daily El País. “People would go to find work in Germany or France. Otherwise, they were unemployed. It was misery.”

Gordillo, who started off working as a high school teacher, grew tired of seeing his townspeople struggling to make ends meet while wealthy landowners filled their pockets.

"When we got to the city council we realized we had to transform the power structure," Sánchez Gordillo told El País. "The power of poor people against the power of the rich. “

The high-school teacher turned political activist began to gather up to 400 people at assemblies he organized every week and slowly but surely started pushing for better irrigation and more land with no-nonsense tactics.

"We saw that the Duke of the Infantado had the most land so we occupied his land, we cut off roads, and at the same time we pressured the government,” Gordillo explained.

Gordillo and his team of supporters shut Malaga and Seville airports down, carried out demonstrations in Andalusia and Madrid and even went on mass hunger strikes.

After a 12-year-long battle with Spanish authorities, the prosperous duke succumbed to the pressure and handed over 1,200 hectares of farmland to the Marinaleda activists.

Surely all this radical behaviour has landed Gordillo in a bit of trouble.

Indeed. The bearded 63-year-old has been to jail seven times, and survived two assassination attempts by right-wing extremists.

It is also rumoured that many locals of Marinaleda have had to move out after Gordillo took action against them for opposing some of his more radical tactics.

So why is he The Local’s Spanish Face of Week?

At a time when tempers are flaring up all across Spain and the indignado (indignant) cause has more supporters than ever, Gordillo still stands out from the crowd for his blatant defiance of the Spanish State.

His decision to illegally and indefinitely occupy land belonging to Seville’s military on Wednesday May 1st serves as both an example and a warning of how far the Spanish public could go in reaction to their deep sense of disenfranchisement.