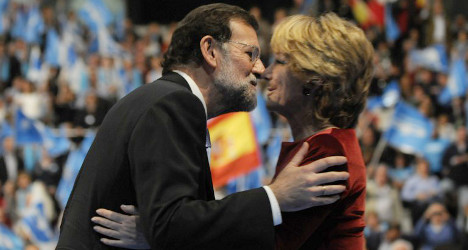 Writing in her blog, Aguirre said she feared Spaniards could now believe there was "no efficient way to climb out of the hole that the Spanish economy had fallen into".

In a thinly veiled reference to Rajoy's forecast on Friday that Spain's economy would shrink by 1.3 percent in 2013 and return to growth of 0.5 percent in 2014, Aguirre said there was an alternative.

But Aguirre said the government now needed to ensure "a reduction of costs" took place.

This electoral platform had seen the PP "voted in with a huge majority" at the country's general elections in 2011. she argued.

The influential politician wrote in her blog this cost cutting would require "a radical reform of (Spain's) public administration.

She wrote: "Now is the time to do this. Reduce the size of the public sector so that Spanish families and businesses can use it to get Spain out of the crisis."

Aguirre's comments carry weight within the PP. She is seen by some as an alternative to Rajoy in the leadership role.

The current president of the PP in Madrid is also a former minister of Education and Culture. In January, Aguirre was offered a headhunting role with the Seeliger and Conde Foundation.