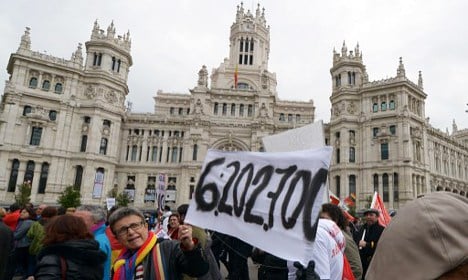 Although numbers were lower than in previous years, thousands took to the streets in Spain, some brandishing flags reading "6,202,700", a reference to the record number out of work in the recession-hit country.

"This austerity is ruining and killing us," read one banner in Madrid, blasting the unpopular German-led policy of squeezing budgets in response to the eurozone's three-year debt crisis.

Jose Antonio Sebastian, a 50-year-old engineer, said he was one of the lucky ones still in work but feared he would soon be joining the ranks of the unemployed, now 27 percent of Spain's working population.

"With the speed at which we are destroying jobs in Spain, I think this will soon happen to me as well. We have no choice but to look for jobs abroad," he said.