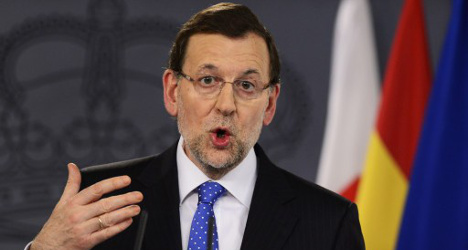 Weak domestic demand dragged down output in the eurozone's fourth largest economy, which has been shrinking since mid-2011, the National Statistics Institute said.

The news confirmed that Spain is entrenched in a double-dip recession that sent the unemployment rate soaring to a record 27.16 percent in the first quarter.

But his right-leaning government has offered little hope of a solid recovery, forecasting last week a 1.3 percent contraction in 2013, and only a feeble 0.5-percent rebound in 2014.

The government predicted that the unemployment rate — now the highest since Spain returned to democracy after the death of General Francisco Franco in 1975 — would not fall below 25 percent until 2016.

At the same time, despite biting austerity measures, Spain is struggling to meet European Union targets to curb the public deficit as tax revenues are squeezed by the slowdown and welfare costs rise to cope with a lengthening jobless queue.

The government has forecast that the public deficit will amount to 6.3 percent of gross domestic product in 2013, well above its earlier target of 4.5 percent.

The public deficit will only fall below the EU-agreed ceiling of 3.0 percent of GDP in 2016, it said, two years later than earlier agreed.

A property market crash in 2008 plunged Spain into a recession, destroyed millions of jobs and left banks awash in bad loans.

The economy emerged gingerly from that downturn in 2010 before sliding back into recession in mid-2011.