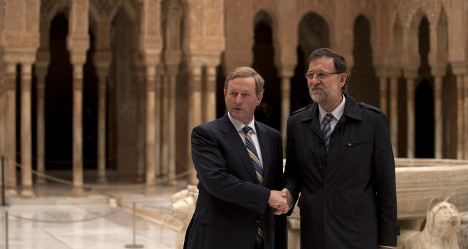 Rajoy said on Sunday that the reduction of the deficit, reforms and the restructuring of the financial system "would not happen from one day to the next".

He said: "I'm aware of the frustration (that goes) with unemployment. Patience, the government knows what it is doing."

Speaking from Granada where he met with Ireland's Prime Minister Enda Kenny, Rajoy said the economic forecast outlined by his government on Friday involved "conservative but credible predictions".

On Friday, the government said Spain's economy, the eurozone's fourth-biggest, would shrink by 1.3 percent in 2013 and return to growth of 0.5 percent in 2014.

But it admitted it would likely take until 2016 to bring the country's public deficit — a crucial measure of financial stability — under the European Union's three-percent limit.

Unemployment will slide to 26.7 percent over 2014 and ease back further to 25 percent in 2015, the government added, announcing the latest crisis reforms it will send to Brussels for approval.

On Sunday, Rajoy said, however, that these forecasts had been made "with the intention of surpassing them and that things will go much better".

The leader of the opposition socialist PSOE party Alfredo Pérez Rubalcaba responded by saying: "The government is predicting that 1,300,000 jobs will be lost by 2016."

Rubalcaba tweeted: "How dare Rajoy to ask the Spanish people to be patient?"

Spain's latest official unemployment figures show the jobless rate has surged past 27 percent, with 6.2 million people out of work.