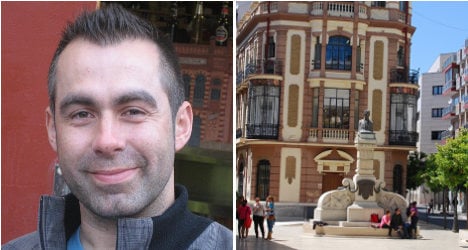 David Eatwell says the people in Huelva are very friendly and down to earth. Photo: David Eatwell/Gert Mewes

So David, how did you end up in Spain?

I'm from Bristol in England, but lived in France for six months during my gap year before I went to university, and then I went back for 9 months as an Erasmus (exchange) student. I just loved living in another country.

After I finished my studies, I ended up doing a job I didn’t really like in England and I thought, why not move overseas again? I was interested in Spain and Spanish culture, and I also thought that Spanish wouldn’t be too difficult to pick up after speaking French.

For the first six months, though, I probably just spoke French with a Spanish accent.

How did you end up teaching in Huelva ? It’s not on most people’s radar.

That's true! But when I moved to Spain, I hadn't worked as a teacher before. I had a teaching qualification (the Cambridge CELTA certificate for teaching English as a foreign language) and I had an inking that being a teacher was something I'd be good at, but I didn't have any actual experience.

So although I cast a wide net over the whole country, I only get three job offers. One was in a tiny village in the middle of nowhere.

One was in Madrid and I didn’t fancy living in a big city where I didn’t know anyone. The last was in Huelva: I already been to Seville, and I knew Andalusia had a lot going for it, so I took the Huelva job.

What were your first impressions of the place?

I guess my first thoughts were: what the hell have I done? When I started working, it was a case of reality crashing in. I thought, I’m going to have to do this for at least nine months.

But the school I worked in was a nice family-run place — still quite small back then — and they gave me lots of support.

Huelva is a very friendly place and the people are down to earth. I met people through my colleagues and my students and that helped me adapt.

Then during my second year in Huelva, I decided to move to Seville. Before that happened, though, I met my future wife María. Luckily she was studying in Seville too, so we could continue our relationship.

We lived in Seville for a couple of years and then we moved to Cordoba for a year. But now we are now back in Huelva.

Which of the cities you've lived in is your favourite?

That’s very difficult to say. Seville is home, and if I had to choose the one place I’d live, it would be Seville. But then again, Cordoba is one of the most beautiful cities I’ve ever seen. Cordoba also has lots of festivals: there’s always something going on.

Huelva is our default home. My wife’s family is from there. The city is small, easy to live in and friendly. At the same time, you can’t get away from the fact that the city is ugly and polluted.

Geographically, this place is also a cul-de-sac. There are only three trains a day to Seville and the journey takes an hour and a half.

I don’t think Huelva has an inferiority complex. But if you are trying to be objective, Huelva is not a beautiful city.

What about the surrounding area?

Right! Of course, I’m talking about the city of Huelva. The province has a lot of beautiful spots. If you have access to a car, there are some lovely beach resorts. Heading west, there is the coast stretching towards Portugal. And if you go east towards Doñana National Park, there are miles of unspoilt beaches.

Mazagón, for example, is a 20-minute drive from Huelva and has a beautiful picnic area.

What about eating and drinking in Huelva itself?

I would definitely recommend El Picoteo. That’s our favourite. Then there’s Bonilla, which is on the water and has great views over the estuary.

A bit outside Huelva, there’s La Rábida Friary which is supposedly where Colombus stayed before he sailed to the New World. There are even replicas of three of the shops of his fleet which are interesting to take a look at.

And what sights are there in Huelva?

To be honest, the city of Huelva is a little short on sights. There’s the church of San Pedro and the the Barrio Inglés, or the English Barrio, which is worth a visit. That's where the English people who owned the old mines in Huelva Province used to live. The houses are all in English style .

You have a young daughter. How do you find raising a child in Spain?

To be honest, I have some doubts about putting my daughter into a Spanish school. We're just getting to that stage and it's a difficult issue.

For me, the Spanish education system has a lot of problems, but I suppose the main one is the emphasis on exams. These exams are almost a daily occurrence whereas I don’t think I even did an exam in the UK until I was 16.

At the same time, I’m confident my daughter will realize she has something different because of the bilingual and bicultural thing.

How do you feel when you go back to England now?

In Spain, I feel conspicuously foreign most days because I’m not really interested in Spanish culture. I don’t really read in Spanish anymore and I don’t watch Spanish television or listen to Spanish music.  My best friends are mainly expats too.

However, I feel like I’m between two stools because I don’t feel particularly at home in England either. These days, I don’t know who some of the people on television are, and a lot of cultural references are lost on me.

But I’m really happy with María and Rocío and I have my friends in Spain and in England, and in other countries too. I’m also really enjoying my job, and work’s important to me, so that’s great.