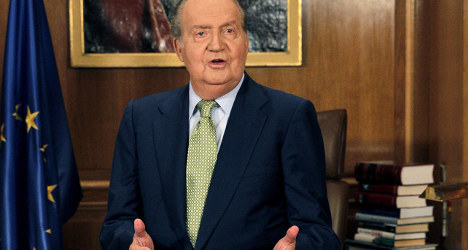 In its article, Le Figaro said the Spanish government was setting up the legal framework for a hypothetical abdication of the King in favour of his son, the Crown Prince Felipe.

"The abdication of King Juan Carlos is no longer a taboo top in Madrid," the paper reported in its article which ran with the title 'The annus horribilus of King Juan'.

The Le Figaro piece examined the falling popularity of Spain's King and linked this to the various scandals facing the monarchy.

These included the scandal involving his son-in-law Iñaki Urdangarin. Urdangarin, married to the King's daughter Cristina is suspecting of diverting funds from the charitable sports foundation he headed up to bank accounts around Europe.

The Infanta Cristina may also have to appear in court to answer questions about the same case.

Check out The Local's handy A to Z guide of Spanish politics.

The French newspaper also highlighted King Juan Carlos' controversial luxury trip to Botswana in 2012. During that trip, the King broke his hip while hunting elephants.

"The King is suffering," the monarch's friend Manuel Bouza told the paper.

Bouza added that if the King did decide to abdicate, his son Felipe was ready to step into the breach.

Le Figaro argued that the Spaniards were more fans of King Juan Carlos than the monarchy itself, and continued to support the King for the key role he had played in the transition to monarchy after the dictatorship of Francisco Franco.

Le Figaro also quoted the ex-director of ABC newspaper as saying: "These days, the monarch is more of a problem than a solution and is incapable of restoring his previous popularity".

A poll conducted in early April by Spain's left-leaning El País newspaper showed that 53 percent of people disapproved of the way the 75-year-old King was carrying out his functions, against 42 percent who approved.

That gave the King an overall approval-versus-disapproval rating of –11, compared to +21 in December 2012, the first time that he has received a negative rating.

The same poll showed that a majority of Spaniards, or 61 percent, approved of Crown Prince Felipe against the 33 percent who disapproved. That gives him an overall approval-versus-disapproval rating of +28, compared to +37 in December.