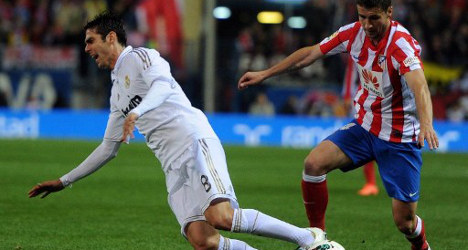 Real will arrive at the Calderon on the back of a devastating 4-1 defeat to Dortmund on Wednesday night. Photo: Dominique Faget/AFP

Atletico Madrid captain Gabi believes his side have a great opportunity to end their hoodoo against neighbours Real Madrid when they host the Spanish champions this weekend.

"There are 14 years worth of desperation to win this game," he told a press conference on Thursday.

"We have spent a long time talking about the best way to win a derby and now we have to go and do it."

Real will arrive at the Calderon on the back of a devastating 4-1 defeat to Dortmund on Wednesday night and Gabi is hoping that result means Jose Mourinho will reserve the likes of Cristiano Ronaldo and Mesut Ozil for the second-leg.

"We expect that Madrid will come here to win the game, regardless of which players play. The result yesterday was one no one expected, not them, nor the people who watched it from the outside, but they know how to get over this.

"It is obvious that at the end of the season those special players like Cristiano or Ozil are the ones that win you most points. If Mourinho doesn't think they should play then it is better for us."

Atletico were also handed a huge boost with the news that Diego Costa's yellow card against Sevilla last weekend has been rescinded so the Brazilian will be available to continue up front alongside Radamel Falcao.

For Real, meanwhile, the focus remains trying to somehow overcome their 4-1 deficit against Dortmund, but captain Iker Casillas said no matter what happens on Saturday he doesn't think it will influence how next month's Copa del Rey final between the two will go.

"The calender has been capricious and certainly it is difficult for us to think that before Tuesday we have a match. And on top of that it is against Atletico at the Calderon.

"It has been 14 years since they beat us and I suppose for them it is an important match, but I don't think it will make a big difference to what happens in the cup final."

An Atletico win would also ensure Barcelona are officially crowned champions on Saturday night should they manage to win away to Athletic Bilbao.

Barca suffered their own disappointment with a 4-0 thrashing at the hands of Bayern Munich in midweek which all but ended their chances of reaching the Champions League final.

However, manager Tito Vilanova is also likely to make a number of changes ahead of Bayern's visit to the Camp Nou on Wednesday with the likes of Thiago Alcantara, Cesc Fabregas and Cristian Tello coming into the side.

On Sunday night meanwhile the focus turns to the race for the final Champions League spot as Real Sociedad host Valencia.

La Real currently hold a two-point advantage over Valencia with just six games remaining, but will be without influential winger Antoine Griezmann as he is suspended.

And it is another crucial weekend in the battle to avoid relegation withthe bottom five sides all separated by just three points.

Defeat to Celta Vigo on Monday dropped Real Zaragoza to the foot of the table and they host fellow-strugglers Mallorca in a crucial clash for both sides on Saturday night.