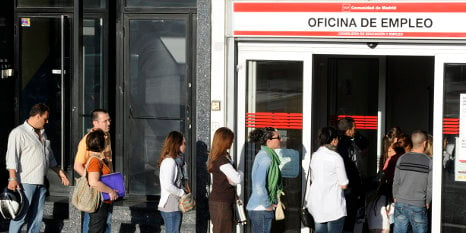 People queue outside a government employment office in the centre of Madrid. Photo: Dominique Faget/AFP

The unemployment rate jumped from 26.02 percent in the previous quarter.

The number of unemployed climbed by 237,400 people to 6.2 million, the national statistics institute, the INE, said.

Spain, once the motor of job creation in the 17-nation eurozone, is in a double dip recession, having yet to recover from the collapse in 2008 of a labour-intensive property boom in 2008 which had allowed economic growth to outpace the European union's for more than a decade.

The Spanish economy, the eurozone's fourth biggest, contracted by 1.37 percent last year, the second worst yearly slump since 1970, and the government forecasts it will shrink again by between 1.0 percent and 1.5 percent this year.

Spain's jobless rate fell to an almost 30-year low of 7.95 percent in the second quarter of 2007 at the peak of an economic boom that allowed the country to create more than half the new jobs in the euro zone between 2002 and 2005.

But the jobless rate has risen steadily every quarter since as the country's housing market collapsed, throwing millions of people out of work.

In France, the second biggest eurozone economy, official data to be released later on Thursday are also expected to show a record number of jobless workers.

Spanish Prime Minister Mariano Rajoy's conservative government, which took office in December 2011 after a landslide general election victory on the back of promises to create jobs, will Friday unveil a new package of reforms aimed at reviving economy activity.

Spain suffers from a lack of competitiveness inside the eurozone and excessive household and company debt, and is seriously hobbled by a troubled banking sector.

Under pressure from Brussels, Rajoy's government has reformed labour laws to make it easier to hire and fire workers and imposed harsh austerity measures to rein in the public deficit, which critics charge has pushed up unemployment.