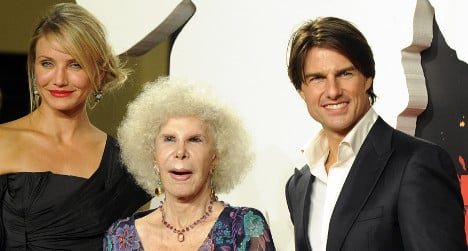 Who is the Duchess of Alba?

The 87-year-old Duchess of Alba — or María del Rosario Cayetana Alfonsa Victoria Eugenia Francisca Fitz-James Stuart y de Silva, to give her the full name — is the 18th Duchess of Alba, and the head of the House of Alba.

"I’m Cayetana de Alba," wrote the Duchess in the first of her two autobiographies. "I've got half a dozen other names and a number of titles too. Sometimes they say I've got more titles than any other noble in the world."

The Guinness Book of Records agrees.

She must be pretty rich then?

That would be an understatement. Cayetana de Alba’s assets include castles, palaces, country houses and land all over Spain. The most famous of her properties is probably the Liria Palace in Madrid, which is the official seat of the House of Alba and also happens to be where the Duchess was born.

In her latest autobiography, she looked on a life that "hadn't been easy", with its world war and a civil war. But she said the "most difficult task" was the reconstruction of the family palace in Madrid.

To give you even more of an idea of the extent of Cayetana’s wealth, the business paper Expansión recently reported the Liria Palace alone has 249 oil paintings by artists including El Greco, Goya, Rubens and Rembrandt.

She has a rather striking appearance.

Pablo Picasso wanted the Duchess to be his muse, but she flat out refused to be painted by the master.

"I think he would have worn me out,” she said in 2009. “I never actually met Picasso. The message came to me via the bullfighter Dominguín."

Cayetana added she had never regretted the decision not to be painted by the man from Malaga. “Being a model is very dull, it’s horrible,” she has said.

In recent times, much of the commentary about the Duchess has focused on her apparent surgical enhancements. However, these have never been publicly acknowledged.

The Duchess of Alba with Camilla, Duchess of Cornwall, at a flamenco show in Seville in 2011. Photo: Cristina Quicler/AFP

What has the Duchess been up to lately?

What hasn't the Duchess been up to lately? On Sunday, she was sightseeing in Rome when she suffered a fall and was rushed to emergency.

Several hours later she went under the surgeon’s knife after it became clear she had broken her femur.

It was a rather unfortunate end to what was supposed to be a romantic getaway. Cayetana de Alba and her third husband Alfonso Díez had chosen Rome for their vacation because this is where they spent their first holiday together.

At that earlier stage, the two were 'only friends' according to Spanish newspaper El País.

This is just the latest health setback for the Duchess of Alba, reported El País on Tuesday. Just after her marriage to Díez in 2011 she suffered a pelvic fracture.

Has she done anything else of late?

Indeed she has. In mid-April, the Duchess of Alba published the second instalment of her autobiography. Following on from the 2011 publication of Yo Cayetana, she released In What Life has Taught me.

In the memoirs, Cayetana says that that the only thing she still wants at her ripe old age is "health" and to "keep on living".

This is perhaps slightly unfortunate given her recent accident in Rome.

The aristocrat made headlines in 2011 for remarrying at the age of 85 to a civil servant 24 years her junior.

The marriage was partly made possible after a valve was inserted into Cayetana's brain to stop the cognitive decline she had begun to suffer.

According to the UK’s Telegraph newspaper, their wedding was the last great feudal wedding in Spain and even overshadowed interest in the wedding of Queen Elizabeth II, which took place a month later.

When Don Pedro passed away, Cayetana caused a scandal in Spain by marrying a defrocked Jesuit priest. He died in 2001.

"I confess I am thinking of keeping on living," said the Duchess recently, "although its only so I can enjoy the expression on people’s faces when I point at them and say: ‘I’m going to bury you all.'"

Has she expressed an opinion about the scandals affecting Spain’s Royal Family?

The Duchess recently told Spanish news agency EFE that she was a staunch monarchist.

She went on to say that despite difficult times for the Spanish royal family, "the monarchy is fundamental to the continuity of Spain as a nation". The Duchess of Alba also described Juan Carlos as a "great King".