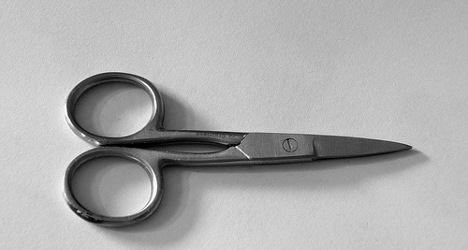 Protestors in Spain often use the image of scissors when creating banners against government spending cuts. Photo: James Bowe

But the reduction should be less than that seen in 2012, when state finances were severely tightened, he told a Madrid news conference.

"We won't make cuts like those we did last year, but it is probable that for some budget lines they will have to be made," Rajoy said.

"We don't want to increase taxes," he added, but "in the end, we also rely on growth forecasts and the size of the public debt over the years to come."

Spain is in the midst of a double-dip recession brought on by a debt crisis and the collapse of a housing bubble.

Although the economic contraction appears to be slowing, unemployment is soaring and government tax revenues are down, hobbling efforts to reduce spending by €150 billion ($195 billion) by 2014.

The Spanish government is to announce its latest macro-economic forecasts on Friday.

Last year, the economy shrank 1.37 percent, the second worst yearly slump since 1970. Government figures previously given suggest it will contract by another 1.0 percent to 1.5 percent this year.

The head of the European Commission, Jose Manuel Barroso, said Tuesday that the commitment by Spain and other EU nations to austerity may have "reached its limits in many aspects".