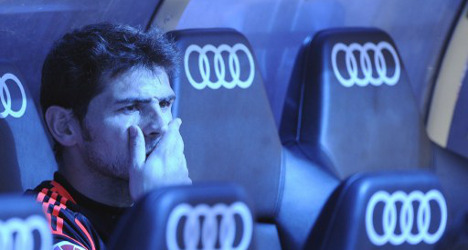 Real Madrid manager José Mourinho has chosen to keep Spain's number one keeper on the bench despite having recovered from his three month long injury. Photo: Pedro Armestre/AFP

The monument sits in the street that Casillas had named after him in the Móstoles area of Madrid, where he is from. It was erected after he led Spain to their first World Cup trophy.

But pictures showed that the monument — which includes an image of Casillas playing for Spain — has been daubed with "C'mon Diego L", a reference to Diego López, who has kept the Spain number one out of the Real Madrid side since January.

Another sarcastic slogan reads that Casillas, who has not played since breaking a bone in his hand in January, was now "the best goalkeeper in Pozuelo (an upper-class suburb of Madrid)".

Manager José Mourinho's decision to keep Spain's number one keeper on the bench despite his recovery from injury has caused divided opinions among Real Madrid fans.

Spain coach Vicente Del Bosque said last week that Casillas would definitely go to the Confederations Cup in Brazil later this year, even if he did not regain his starting place with Real Madrid.

Casillas, 31, has won 143 international caps and was a member of the Spain side that won the European championship in 2008 and 2012 and the World Cup in South Africa in 2010.