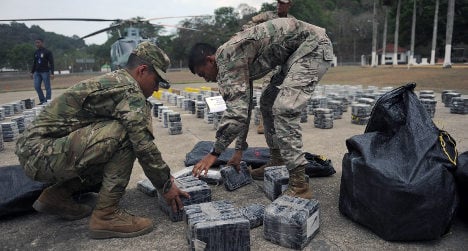 A drug seizure in Panama: One of the key entry points for South American cocaine into Europe is the northern Spanish province of Galicia. Photo: Rodrigo Arangua/AFP

"We are winning battles but it will be difficult to win the war," said the head of the anti-cocaine squad of the anti-drugs unit of Spain's national police force, Jose Antonio Rodriguez.

"Traffickers have money on their side, a lack of scruples and they can develop their activities without limit."

Spain's proximity to Morocco and its easy access to the Atlantic Ocean make it "a natural entry point for drug shipments for all of Europe," said Rodriguez.

Cocaine arrives in Spain from Latin America in Galicia, a north-western region whose rugged coastline is dotted with coves and inlets, and in the southern port of Cadiz, and is then shipped overland by truck to France, Italy, Germany and the Netherlands.

Spain seized 20.7 tonnes of cocaine last year, 24.9 percent more than in the previous year and 325.5 tonnes of hashish, down 8.5 percent from 2011, Interior Minister Jorge Fernández-Diaz said on Thursday.

That represents 41.21 percent of the total amount of cocaine which was seized in Europe last year and 73.69 percent of the hashish, according to the minister.

"Since then we have observed a clear downwards trend, which may be explained by changes in international trafficking routes," Spanish police wrote in a report last year.

"Very often drugs no longer arrive directly from Latin America, instead they pass through Africa using the traditional routes for hashish trafficking," she said.

Ghana, Liberia, Mali, Nigeria and Senegal are countries used by traffickers to get cocaine from Latin America to Spain, she added.

Latin American drug rings can rely on the help of strong local networks in Africa to help move their narcotics to Europe, said Rodriguez.

"We have found that groups in the region such as Al-Qaeda in the Islamic Maghreb cooperate with them, they get paid to transport drugs to north Africa," he said.

The make-up of drug rings sending cocaine to Spain has changed as well.

The Colombian groups which dominated the trade in the 1980s have given way bit by bit to Mexican cartels, said Gratius.

Drug traffickers' interest in Europe has increased because demand from the continent for cocaine is growing, she added.

Over the past decade the number of cocaine consumers in Europe has doubled while demand for the drug has plunged by 33 percent in the United States, she said.

In response European nations have reinforced regional cooperation as well as their cooperation with police forces in Latin America to stop the flow of cocaine.

Hiding cocaine in banana shipments remains one of the favourite tactics used by traffickers.

"Shipping containers are one of the points of entry for drugs that are used the most. Ports are very busy and perishable goods must leave very quickly," said Rodriguez as he held up a plastic banana which was used to hide cocaine.

"Traffickers never stop innovating. They have even used live animals," he added as he showed X-ray images of a labrador which had been stuffed with packages of cocaine inside its body by smugglers.