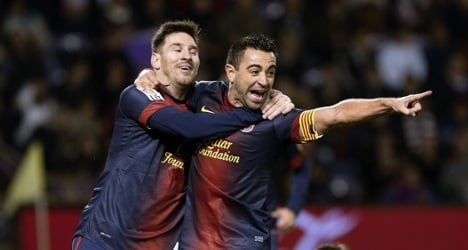 Messi and Xavi were both part of the FIFA World XI at the Ballon d'Or awards ceremony last January. Photo: Cesar Manso/AFP

The 26-year-old Messi missed Saturday's win against Levante and has missed the last fortnight for the Spanish league champions-elect since coming on to help inspire his side in their 1-1 quarter-final second-leg draw with Paris Saint-Germain.

Barcelona went through on away goals, after a 2-2 draw in Paris, but looked in real trouble until the former World Player of the Year gave them a lift and now Xavi is confident Messi will start at the Allianz Arena.

"He's very important for our attack and you could see we missed him in our last few games," said the 33-year-old Xavi.

"I am sure he will be at his best so we can again see what an awesome player he is.

"It's important to have him in our ranks and it will have an influence on Bayern Munich if he plays."

With Barcelona coach Tito Vilanova still recovering from cancer surgery, assistant coach Jordi Roura spoke to the press and said the backroom staff are working hard to get Messi fit.

"He has a good feeling, he's improving medically," Roura said.

"Of course, when you have a player like Messi in your team it makes a huge difference, he can dictate the game and lift the side.

"We know he is the sort of player who can get us through a round on his own.

"We have won games without him, but it's always important to have him on the pitch, there is no denying that."

Barcelona are competing in a record sixth successive Champions League semi-final and are looking to lift the trophy for the third time in five season after their triumphs in 2009 and 2011.

Bayern won the team's only previous semi-final meeting, 4-3 on aggregate back in 1998-99, but few Munich fans will need reminding how Barcelona hammered them 4-0 in the 2009 quarter-final, first leg before winning 5-1 on aggregate.

With the return leg to come at the Camp Nou on May 1, Xavi said the visitors will not play for a draw.

"No, we'll attack, we don't know how to play any other way and we need away goals, this is a strong opponent, but I think we are coming to Munich at the right time," said Xavi.

"Ball possession will be crucial, we know we are at our strongest when we keep the ball.

"It's a 50:50 match, they are German champions, in their cup final and have reached the semi-finals without problems, which couldn't always be said for us.

"We will try and dominate the game so we can take a lead back to Barcelona."

Having failed to impress in the quarter-final against PSG, Xavi said the players draw confidence from their last-16 tie against AC Milan, when the Italians enjoyed a 2-0 home win, only to suffer a 4-0 defeat in Barcelona.

"The Milan game was the reference for us, we held the ball very well, moved around and we had a lot of pressure from the back," he said.

"We were playing completely on attack, the Milan match was the most important for us, more than the PSG game."