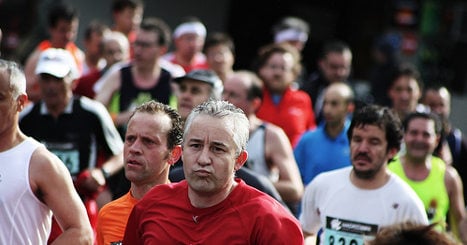 Runners in the 2009 edition of the Madrid marathon. Photo: Hermann Kaser

The group is organizing an event called A Guiri Run for Boston which will take place as part of the Madrid marathon on April 28th.

"It was a matter of feeling so far away and wanting to do something," said group organizer Nicole Jewell, who is originally from Atlanta but who now lives in Madrid.

Jewell said she had managed to organize a number of free slots for the group whose members will run wearing specially designed dorsals.

"The Madrid marathon has been very generous in offering free entry for our group members," said Jewell.

"We are now finalizing our registrations."

Jewell said the group were not planning to run the whole marathon but only the 10km event, which is being held on the same day as the marathon.

"We plan to run together in a group, and everyone is committed to crossing the finishing line of the 10 kilometres," she said.

"Most of our participants are foreigners, including students from Boston who are here in Madrid on foreign exchange programs, but we have a few Spanish people joining us too."

A number of local businesses have got behind the idea too and will offer prizes to the participating runners.

These include the restaurant Alfredo's Barbacoa, Iber English, Wicked Sweet Madrid and the El Rastro Taste of America shop.

Also getting involved are the Triskel Tavern and The English Warehouse. They are treating runners to a pint and a buffet after the completion of the run.

Anyone interested in knowing more about the run or supporting the event in any way can visit the group's Facebook page.