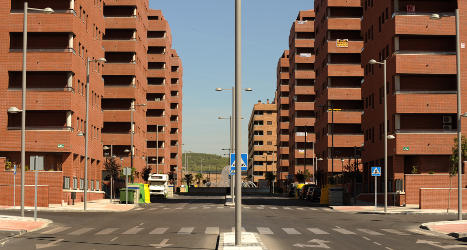 Spain's banks were hammered by the collapse of the country's real estate bubble in 2008. Photo: Pedro Armestre/AFP

The new figures were in line with upward revisions announced in late March by by the Commission.

The figures showed that Spain, which has the fourth-biggest eurozone economy, posted the biggest 2012 deficit of 10.6 percent of gross domestic product (GDP), including the cost to the state of recapitalizing banks that were hammered by the collapse of a real-estate bubble in 2008.

Madrid underscored at the end of March that when this cost was stripped out of the calculation, the public deficit fell to 6.98 percent of GDP.

Spain wants leeway from the EU to ease its deficit target for 2013 to six percent, and to push back as far as 2016 the obligation to get back within the terms of the EU's Maastricht Treaty, under which member states are supposed to have public deficits of no more than three percent of GDP, and debt of no more than 60 percent.

The latest existing agreement between Spain and the Commission is for the deficit to be reduced to 4.5 percent in 2013 and 2.8 percent for 2014.

France, meanwhile, came in at 4.8 percent last year, a figure initially published in late March as well, when the government also revealed that public debt had reached a new record of 90.2 percent of GDP — nonetheless broadly consistent with the eurozone average.

Italy logged 127 percent, a figure historically seen as unsustainable over the long term.

The French deficit hit 5.3 percent in 2011, and Paris wants to bring it down to 3.7 percent this year and 2.9 percent in 2014, which would mean a delay that it maintains is necessary so as "not to compromise" much-needed growth by what it considers undue budgetary rigour.

The average public deficit for the 17 eurozone states came in at 3.7 percent of GDP, though the biggest economy, Germany, posted a surplus of 0.2 percent.

The Commission will publish its latest in-depth economic forecasts for 2013 and following years on May 3rd, covering growth, unemployment and inflation as well as deficit and debt levels.