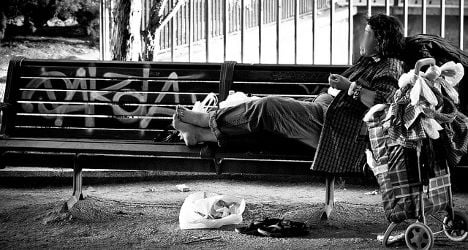 One in four homeless people in Madrid has completed some form of higher education and 41 percent of them are sleeping rough as a result of losing their jobs. Photo: Chris Stephenson

Spain’s capital has the highest number of homeless people ever, and yet the profile of those sleeping in the streets is in stark contrast to what one might expect.

One in four homeless people in Madrid has completed some form of higher education and 41 percent of them are sleeping rough as a result of losing their jobs.

Only 6.4 percent are addicted to drugs and just 21 percent have a problem with alcohol, online daily 20minutos reported on Monday.

Madrid’s emergency service Samur has found most of the newest homeless people in the capital are either middle class or lower middle class who have been affected by Spain's financial crisis.

They haven't given up hope, though.

Most of them are putting their skills to good use by buying and selling off scrap metal, becoming street artists or musicians and some have even told Samur they are still looking for a normal job.

Madrid’s historic Plaza Mayor, a tourist hotspot during the day, becomes a resting ground overnight for over fifty people who have lost their homes.

“When the sun rises, everybody who sleeps at the Plaza Mayor gets up and tries to make ends meet. Only a few stay under the cardboard,” Jack, one of Madrid’s 2041 homeless people told 20 minutos.

The number of middle class Spaniards who are now homeless as a result of the crisis is on the up — 48 percent of those interviews by SAMUR were Spanish, with Romanians and Bulgarians making up most of the foreigners without a roof over their heads.

64-year-old Paco moved to Madrid to work in construction, but when the housing bubble burst in 2008, he found himself without work, money or family to help him stay off the streets.

“I live on the street, but I’m not from the street,” Paco told 20minutos.

"I make a living by selling off scrap metal but there are so many of us doing it now it's hard to make ends meet."

“I've always been a hard-working person and I will continue to be a decent person.”