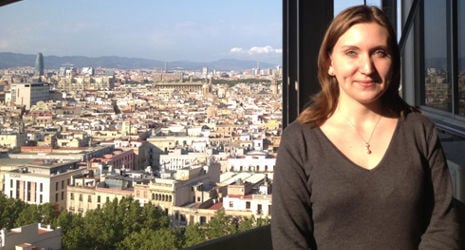 "We have 26 nationalities in our Barcelona office and our website is translated into 22 different languages."

So Andra from Romania, tell us a bit about yourself?

I’m originally from Bucharest but I've been living in Barcelona for three years now.

I studied International Relations and Economics and completed an MA in Human Resources (HR) back home.

I also worked as an economist and in HR before coming to Spain.

What made you move to Barcelona?

I came as a tourist and I absolutely loved the city!

So I decided to complete another MA here, this time in Social and Labour Rights.

It helped me break into the Spanish job market and also gave me time to decide whether I wanted to move to Barcelona permanently.

What does your work as HR director for Only Apartments involve?

I handle all aspects of HR for the company — recruiting, staff changes, you name it.

How do Spanish work practices compare to those of Romania?

Romania has been member of the EU for five years now and things are going fairly well over there.

I think people in Spain are also more laid back, even in the way they dress in the office.

Romanians have somewhat of a bad reputation in Spain. Have you ever had any problems as a result of that?

Not at all. I think it all depends on how you are and behave.

I openly tell people I've met and worked with that I'm Romanian and it’s never been a problem. They've always been friendly to me.

Your company, Only Apartments, is as international as they get. Why do you think that is?

We're a Barcelona-based apartment rentals portal but we have properties in 92 countries for instant booking.

That means our employees have to have the cultural knowledge, languages and international experience to be able to cater to a truly global client base.

We have 26 nationalities in our Barcelona office and our website is translated into 22 different languages.

What language does everybody use in the office then?

It really depends on who you're talking to. I'd say the main languages used in the office are Catalan, English and Spanish.

But then again if two Germans are chatting they're likely to be speaking in German. There are no rules saying you have to talk in one specific language.

I'm still brushing up on my Catalan because I think it will help me integrate even further into Catalan society.

There seems to be an abundance of tourism internet portals in Barcelona. Why is that?

Barcelona is a huge city break destination for tourists from all over the world.

It’s also an extremely cosmopolitan city where 20 percent of the population is foreign.

That's why it’s such a great place to find international candidates that can deal with foreign markets.

Our sales and customer service teams, for example, are made up entirely of expats.

So would you recommend Barcelona as a suitable destination for expats with a background in tourism?

Yes, definitely! But not only to foreigners.

Having the right language combinations and skills can land you a job in Barcelona with a company such as ours, whether you’re Spanish or from anywhere else.

I feel privileged to live in such a beautiful and multicultural city.

And being able to see the sea from our office is an added advantage!