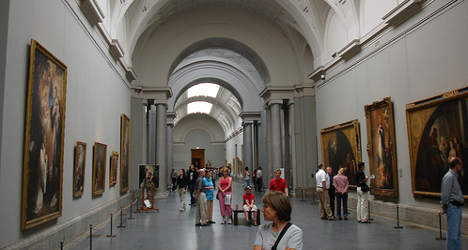 The pieces in question include around ten Spanish illustrations and drawings from the 17th century, reported El País on Friday.

In what museum director Miguel Zuzaga described as an "unfortunate mishap", the water leak also caused damage to the oil painting The Wedding Banquet by Flemish artist Jan Brueghel the Elder.

El País reported sources from within the museum as saying other paintings had been affected.

"Nobody is happy that this has happened," said the museum's director.

"But while we don't want to talk down the importance of what happened, we also don't believe it was a major incident," Zuzaga said.

He added such things can "happen in any museum at any given moment, whether (they) are old or new".

After the episode, Zuzaga and his team informed the Prado's board of directors.

The institution then decided to keep the news to itself.

Now, though, the details have emerged.

On March 11th, a power cut in the Prado's storeroom saw maintenance staff visiting the storeroom.

During this visit, they spotted the water damage and established that the electrical short circuit was a direct result of the water leak.

The water itself was coming out of three small nozzles of a sprinkler that was part of the museum's fire-prevention system.

The leak lasted 24 hours before staff at the museum realized what was happening.

The Prado's director assured El País that staff had carried out "exemplary" restoration work on the artwork damaged by the leak.

He said the restorer Clara Quintanilla had already removed all excess moisture from the surface of the Jan Brueghel painting.

This is not the first time that water damage has affected paintings at the Prado, said El País.

In 1993, the then director of the museum was sacked after a water leak in the room where Velazquez' Las Meninas was stored.