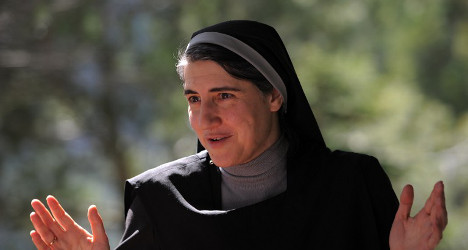 "Why should there be a tax on basic goods and no tax on financial trading?" says Sister Sister Teresa Forcades. Photo: Lluis Gene/AFP

In an interview with AFP, Forcades denounced the austerity measures implemented by Spain's conservative government, which include cuts to health and education spending.

The government imposed the cuts to rein in the public deficit. But Forcades said: "The cuts go against the needs of the majority and go in favour of the interests of a minority."

Forcades, wearing her nun's black habit, spoke seated in the leafy garden of the convent at Sant Benet, about 50 kilometres (30 miles) north of Barcelona, which she shares with 35 other nuns.

This feminist and radical thinker has lived at the brick and rock convent near the Montserrat mountain since 1997.

Forcades is a doctor by training. She rose to prominence during the height of the global swine flu outbreak in 2009 when she argued that vaccines against the disease rushed out by pharmaceutical companies had not been properly tested for public use.

Now, together with Arcadi Oliveres, a 67-year-old economist who is one of the ideologues behind Spain's 'indignant' movement, she has has launched a political manifesto. And in just two days it has collected 14,000 signatures.

Among her proposals is a unilateral declaration of independence by Catalonia, a region of around 7.5 million people which has its own language and culture.

She also advocates the nationalization of banks and energy firms, housing rights and tough measures against corruption.

"Why should there be a tax on basic goods and no tax on financial trading?" she said. But while she said she was against the abuses of capitalism, she did not oppose private enterprise.

The goal of the two campaigners is to present a "citizen's list" of candidates to stand in the next regional elections in Catalonia in northeastern Spain. Those elections are scheduled for 2016 — two years after the region is set to hold an independence referendum.

"We think it is imperative, necessary and possible to change society" by non-violent means, said Forcades.

"A break is needed because it is what people want," she added.

Born in 1966 in Barcelona, Forcades said her family considered "the Church, like the monarchy, to be an outdated institution".

But when she was 15-year-old she read the Bible for the first time and discovered her religious vocation.

"It had an impact on me," said Forcades, who expresses her strong convictions in a soft voice and a friendly demeanor.

She studied theology in the United States and in Barcelona after completing her studies as a doctor.

But she said the basis of her religious convictions lay in Liberation Theology, a strand of Catholicism that emerged in the 1960s in Latin America which seeks to empower the poor.

Forcades said the first theology book which she read was Jesus Christ Liberator: A Critical Christology for Our Time by Leonardo Boff, a Brazilian Franciscan professor known for his active support for the rights of the poor and excluded.

The author of three books herself, including one on feminist theology, Forcades criticized the "misogyny" which she sees within the Church.

"I would like it if within the Church, and within society, nobody, neither a man or a woman, has their access to the government or a  liturgical position blocked because of their gender," she said.

A defender of the use of contraceptives, Forcades argues the Catholic Church needs to "humanize" its position on abortion.

Reforms will likely advance under Pope Francis, who may be more receptive than his predecessors to an "internal democratization" of the Church, she said, as the bells of the convent rang out to call the nuns to prayer.