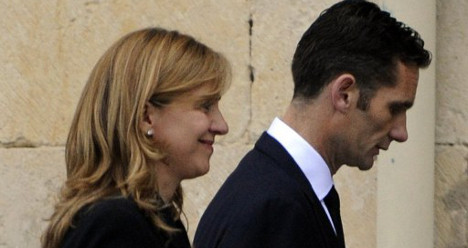 The Infanta Cristina has been asked to appear in court to answer questions about her knowledge of the business dealings of a sports foundation run by her husband. Photo: Rafa Rivas/AFP

Public prosecutors lodged the appeal with the court on the Mediterranean island of Mallorca on April 3, arguing that the princess was being unfairly summoned to testify because of her royal rank, and that proof against her was "non-existent".

Cristina, 47, last week also lodged a petition on her own behalf appealing the summons issued by a judge who has named her a suspect in the graft investigation.

The syphoned-off money was allegedly placed in the non-profit Nóos Institute, which Urdangarin chaired from 2004 to 2006 and of which Cristina was a board member.

Cristina is suspected by the court of being aware of the institute's business operations, based on evidence including e-mails provided by Torres.

She is also suspected of allowing her husband to exploit her prestige as seventh in line to the throne.

The princess's corruption hearing, originally scheduled for April 27, has been postponed pending the outcome of the summons appeal.

Cristina's entanglement in the probe has plunged Spain's monarchy into an unprecedented crisis. It is the first time a direct relative of the king has been called to appear in a court on suspicion of wrongdoing.

There is speculation of a possible abdication by 75-year-old King Juan Carlos, amid an all-time low in the level of public support for the monarchy.