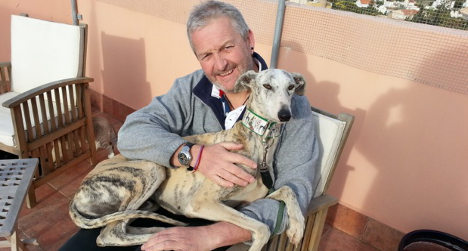 How did you end up in Spain, Chris?

I used to run a consultancy business in London and we helped small businesses get up and running.

We would sometimes go in and run the companies for a while, or we'd help them find suitable merger partners.

At one stage I had part ownership in a company that was involved in food testing.

During that period, I came out to Almería (in Andalusia) to look at the products being grown in the glasshouses here, and that's how I got to know the area around the town of Almerimar.

It struck me and my wife as a pleasant and affordable place to live: we bought a house in the town in 2000 and finally moved here in around 2006.

Tell me about your animal transport business.

I started the business partly because I was sick of the rat race in London and my wife and I wanted to do something more meaningful with our lives.

Basically, we transport people's pets for them, which mostly means moving animals from Spain to the UK and northern Europe.

There are a lot of unwanted dogs in Spain, which is largely a result of the fact that most Spanish people don't believe in sterilizing their pets.

When people's pets give birth to a litter, they might keep one animal and either dump the others in the countryside or take them to the local "perrera" or pound.

These animals are kept for a while and then killed if nobody wants them.

At the same time, there are lots of people — generally expats living in Spain — who want to 're-home dogs', or rescue them from Spain's pounds.

The whole situation is a bit like a conveyer belt: rescue groups get "kill dates" from local pounds and then get on Facebook and try and organize new homes for those animals.

My job is then to move the animals from the pounds to the rescue centres.

Often I'll see the animals more than once — first when I deliver them to the rescue centre, and then later when I move the animals to their final home.

Is there any way to solve Spain's stray animal problem?

In the short-term, the Spanish government should introduce sterizilation programs.

But I should point out that expats are part of the problem too. They can create false colonies of animals by feeding strays and making the dogs stronger.

A lot  of well-meaning expats and visitors are actually exacerbating the problem.

At the same time, many expats adopt stray animals while they are living here in Spain.  But when it's time to go home — often because they have run out of money — they find they can't afford the €300 to €500 it takes to get a dog's papers in order.

And can you now Almerimar for me?

The town is basically a 'residential tourist trap'.

It was purpose built as for Spanish tourists and has hotels and a golf course.

When we arrived In 2006, the town was in a middle of a growth spurt. There were 30 cranes on the skyline. Now, though, with the crisis, there are just two.

Physically, the place has also become shabbier because there are a lot of half-finished apartments and communities.

The local mayor, who is based in Ejido — about 6km up the road — was arrested as part of the huge Poniente Scanal which involved the embezzlement of €160 million.

We used to have, for example, an army of 50 gardeners or so. Now there are just four or five trying their best to do what they can.

But this is still a great place to live if you want a relaxed and simple life with long lunches.

My wife and I enjoy working with the animals and we also have plenty of time to enjoy each other company too.

Where would you take visitors to Almerimar?

The castle in Almería, about 45 minutes' drive away is a mini-Alhambra.

Then we also have the Desert of Tabernas, just inland from us where they filmed a lot of spaghetti (Italian made) westerns.

I would also recommend going out to the glasshouses. There are organized tours you can do, and the organic produce farms are really interesting.

About 50 percent of the fruit and vegetables exported from Spain come from here.

What about eating and drinking?

I don't really do recommendations but I always say that wherever you are in Spain, just choose the least likely door and step inside.

You often find the most amazing places when you get past the counter.

And if you're ever in Almerimar on a Friday evening when I'm in town, you'll probably find me at D-Bar.

I'll happily fill you in on the town and surrounds.

PARTNER CONTENT
Mental health: what are the warning signs international residents should look out for?
Url copied to clipboard!