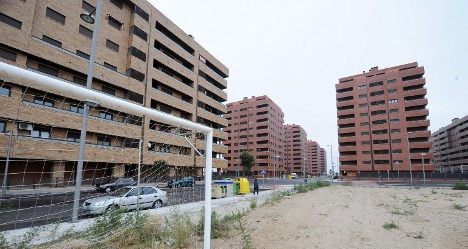 Developers hoped the town of Seseña, south of Madrid, would attract 40,000 inhabitants but after the credit crunch only 3,500 people moved in. Photo: Philippe Desmazes/AFP

The total number of empty dwellings in Spain is 3.443.365, new figures from Spain's national statistics institute, the INE, show.

Some 13.7 percent of the more than 25 million homes in Spain are empty, the figures reveal.

The highest percentage of empty houses is in Andalusia — at 18.5 percent.

Other regions with a high number of empty houses include Valencia (14.7 percent) and Catalonia, at 13 percent.

Over one in five (21.4 percent) of these empty houses was built within the last ten years.

The figures, which come from the INE's census of buildings in Spain, show that the total number of homes in Spain was 25,208,623 on November 1st 2011.

Nearly 10 percent of those homes were built in the decade previously.

In 2008, Spain's real estate bubble burst and the country entered a crisis which continues to this day.

Figures from a national judiciary council show that Spain's courts have carried out some 252,826 expulsion orders since 2008, news agency AFP reported recently.

Protests against these home evictions have culminated in so-called 'escrache' style demonstrations where the homes and offices of politicians are targeted directly.