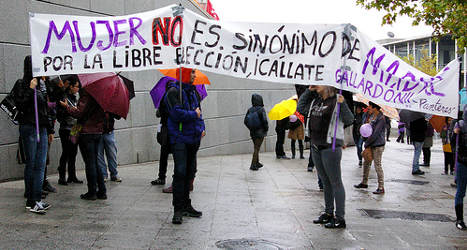 Pro-choice demonstrators at Madrid's Puerta de Toledo in 2012. The banner reads: "Women is not a synoynm of mother". Photo: Gaelx/Flickr

Prime Minister Mariano Rajoy promised during the 2011 election campaign that swept his Popular Party to power to reform the abortion law but the changes to the legislation have been repeatedly put off, prompting a rebuke from the Spanish Church.

Justice Minister Alberto Ruiz-Gallardón said on Monday his government would "promptly" reform the abortion law passed by the previous Socialist government, adding that life is "an inalienable right".

"The risk to physical and mental health can not be considered as a pretext to not protect the life of a newborn," he added at a conference in Barcelona organised by the conservative daily newspaper La Razon.

The minister already sparked controversy last year when he said the promised reform of the country's abortion laws would make the procedure illegal in cases where the foetus is deformed.

Under a law introduced by the Socialist government in 2010 women were given the right to abortion on demand for up to 14 weeks of pregnancy.

The 2010 law also allowed women the legal right to abort up to the 22nd week of pregnancy in cases where the mother's health is at risk or the foetus shows serious deformities.

The minister's announcement came just hours after the head of Spain's Catholic Church, Cardinal Antonio Maria Rouco Varela, called for an "urgent reform" of the 2010 law, which he said had "led to a rise in the number of abortions to terrifying levels".

He was speaking at a news conference held at the same time as Rajoy was meeting with Pope Francis at the Vatican, making him the first European leader to hold talks with the new pontiff.

But the plan to tighten the abortion law has angered the Socialist Party, which decriminalized abortion in Spain in 1985 in the cases of a malformed foetus, rape or potential mental or physical damage to the mother and then broadened access to the procedure with the 2010 legislation.

During a debate in parliament on Wednesday, a Soclialist lawmaker told Gallardon that concern for the risk to a woman's health "has never been a pretext" for an abortion but was instead a sound legal reason that was backed by Spain's Constitutional Council, the nation's highest constitutional authority.

"What you and Rouco Varela don't know is what such a decision means to a woman," she added.

"We will not accept that Rouco Varela govern us," she said on Tuesday during an interview with radio Onda Cero.

"And women, that is to say mothers, don't they have a word in this?

Ministers, judges, bishops, scientists are going to decide what we should do with our motherhood. They know. We obey and shut up. Amen," she wrote on her Facebook page on Wednesday.

The secretary-general of the Socialist Party's youth wing, Nino Torres, joined in the criticism of the planned reform, saying Tuesday that it "only pleases ultraconservatives without solving the real problem of undesired conceptions."

The vast majority of Spaniards, 81 percent, are against banning abortion in cases where a foetus is malformed, according to a poll published in July 2012 in left-wing newspaper El País.

The 2010 abortion law was one of a series of liberal socials reforms, including same-sex marriage and fast-track divorce, which angered Catholic Church authorities.