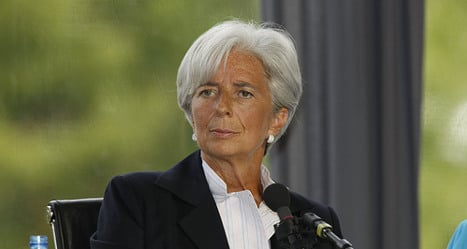 The head of the International Monetary Fund has warned the Spanish government against making savings for their own sake. Photo: MEDEF/Flickr

The IMF chief said Spain would return to growth next year "unless the country was forced to adopt tough fiscal consolidation measures".

She said the IMF was "certainly predicting growth for 2015" but there was "no objective reason to push for a drastic reduction in deficit.

"We're pleading for reasonable and sensible financial restructuring for Spain," Lagarde said in an interview published in business daily Expansión.

This meant more than putting a "an exclusive and excessive focus" on deficit reductions that only have numerical objectives, stressed the IMF boss.

"These reductions would also be difficult to implement given current  circumstances," Lagarde added in what is her first interview with a Spanish media outlet since she took office at the IMF in 2011.

The IMF predicts Spain's economy will contract by 1.6 percent this year before rebounding to grow by 0.7 percent in 2014.

Now, the Spanish government wants Brussels to agree to relax its 2013 deficit target to about 6.0 of GDP from the previously agreed 4.5 percent, a government source said this month.

Spain also wants the European Union to agree to give it an extra year to bring its deficit to below the bloc's limit of 3.0 percent of GDP, the source said.

Struggling in a double-dip recession sparked by the collapse of a decade-long property boom in 2008, Spain has been under tight European Union surveillance since 2009.

Determined to slash the public deficit despite rising public protests, Rajoy's government has enacted spending cuts and tax increases aimed at saving €150 billion ($194 billion) between 2012 and 2014.