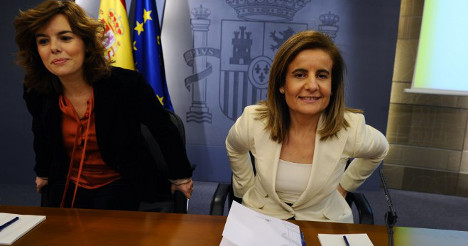 Speaking during a session of Spain's congress, the minister said that young people who wanted to leave the country in search of work opportunities abroad were welcome to do so.

She said this was called "external mobility," reported Europa Press on Wednesday.

"What we want is to work towards a situation where those who want to leave can, but we also want to make sure that talented people who have left come back as soon as possible," said the Employment Minister.

She described the youth unemployment problem as a "problem for everyone" and said the opposition socialist PSOE party should now help in getting young people back to work.

The minister made the comments after PSOE deputy María González Veracruz talked of "economic exile" among young Spaniards.

"It's true that a lot of young people, and not-so-young-people have left the country looking for work because of the crisis," said Báñez.

But she also stressed that "50,000 young people emigrated under the former socialist government".

She went on to point out that that "external mobility" was related to the "idea of change" and that many European citizens were also living in Spain, reported La Vanguardia newspaper.

The minister said although there were 17,300 Spaniards living elsewhere in Europe, 40,000 British people came to Spain.

In response, socialist deputy Veracruz described the departure of young people from Spain as an "unsupportable tragedy".

"If young people have to leave the country to find opportunities, it's to a large extend because of your (the Popular Party's) economic policies," said Veracruz..

"It's because of your cuts and the lack of a policy on growth, which condemns the country," she added.

The Twitter reaction to Báñez comments was almost immediate.

Tweeter Sr Papets wrote: "Fátima Báñez says the exit of young Spaniards is called external mobility. It´s called Exile! We should give her a dictionary!"

David Z tweeted: "A minister talking about external mobility as a solution is just demonstrating her incompetence."

The Huelva branch of the PSOE said: "We reject the declarations of Fátima Báñez in the face of the drama of many your people obliged to leaver our country to find work.