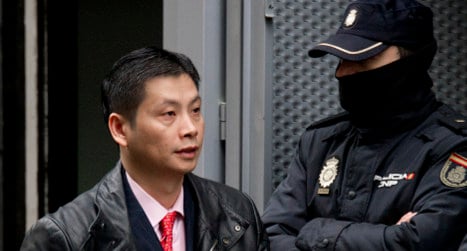 Madrid-based Chinese businessman Gao Ping is accused of lanudering up to €300,000 a year. Photo: Dominique Faget/AFP

Gao Ping was arrested in October 2012 along with dozens of mostly Chinese suspects as part of a police investigation dubbed 'Operation Emperor' but a court ordered him bailed the following month due to procedural irregularities relating to his detention.

Spain's High Court, the country's top criminal court, ordered his return to jail on Tuesday because of the "sufficiently intense temptation" to flee the country and because of the serious nature of the crimes he is alleged to have committed.

Spanish prosecutors suspect Gao of leading a gang that allegedly laundered up to €300,000 ($392,000) a year, dodged taxes, bribed officials and forged documents.

Judges are due to decide at an unspecified date whether he will go on trial.

Police seized €10 million euros in cash as part of their operation as well as 200 cars, several guns, jewels and art works.

In the wake of Ping's arrest in October, there were reports of Spanish shoppers deserting so-called 'chinos' — or shops run by Chinese people — in droves.

Traders at the huge Cobo Calleja Industrial Estate in Madrid told Spanish national broadcaster RTVE in early November that 70 percent of their business has evaporated.

Spain’s Chinese community then came out in a spirited bout of self-defence.

Representatives from 25 Chinese associations based in Spain sat down with journalists from the country's EFE news agency and condemned all criminal actions.

They went on to say that not one member of Spain’s Chinese community should be afraid to report illegal activity.

In that same meeting, Julia Zhang, president of the Chinese group Asociación Nihao España, told EFE that Chinese children in Spain were currently afraid to go to school or catch the metro because they were being taunted with the words "mafia kids".

Zhang also said that some customers in Chinese-run grocery stores were refusing to cough up for the tax component of product prices because “the Chinese don’t pay taxes anyway”.

Then, in early November, Chinese shop owners at Madrid’s Cobo Calleja Industrial Estate – which is the largest conglomeration of Chinese businesses in Europe – took the unheard of step of closing up shop for a day as part of a bid to reclaim their image.

Speaking about the protest, Law student Yinong Chen, one of the spokespersons for the local traders group, said it was time to challenge the misconception in Spanish society at large that the country’s Chinese population represented a closed and secretive society.

Chen said the Chinese in Spain were just like the Spaniards of earlier generations: they had come to this country as immigrants and were now working hard and making sacrifices to earn an honest living.

Some 165,000 people of Chinese descent currently live in Spain according to the national statistics office, the NIE.

The community has grown six times in the last decade.

Thirteen percent of Spain’s Chinese community were actually born in Spain and 70 percent come from the Chinese region around Qingtian and Wenzhou. 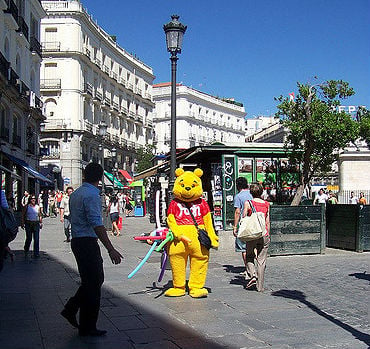