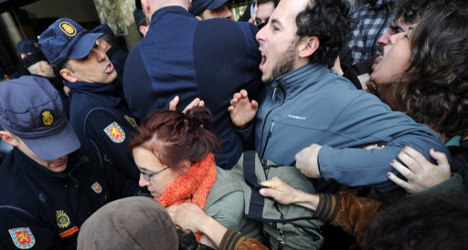 In 2008, Spain's real estate bubble burst and the country entered a crisis which continues to this day.

Figures from a national judiciary council show that Spain's courts have carried out a staggering 252,826 expulsion orders since 2008, news agency AFP reported recently.

In total, 38,778 primary and secondary residences were taken back by lenders last year, said the country's El País newspaper in early April.

At the same time, a housing census carried out by Spain's national statistics office showed that 20 percent of Spanish residences stood empty in 2011.

It's perhaps not surprising then that the anti-home eviction movement has been gathering ground in Spain for some time now.

On January 29th, the issue gained even more prominence when Ada Colau, a 38-year-old civil rights activist from Barcelona, condemned Spain's current evictions regime as "criminal" in the national parliament.

Colau has headed up Spain's anti-evictions lobby, the PAH, for four years, with the group claiming to have stopped over 600 evictions in that time.

After Colau's appearance in parliament, however, the popularity of her group really took off.

On February 12th, Colau and her colleagues attended parliament to call for legal changes to allow outstanding mortgage debt to be liquidated on surrender of property.

They presented a popular initiative against forced home evictions which had been signed by over a million and a half people.

Colau's words in parliament were given extra weight when Basque MP Uxue Barkos informed the house that a couple in Mallorca had just committed suicide after finding out they were to be evicted.

Since then, the PAH has staged several high profile protests against home evictions.

Recently, though, the group has changed its methods, adding the highly controversial "escrache" tactic to its arsenal.

"Escraches" — the word comes from an Argentinian slang word meaning to denounce people — involve the direct targeting of politicians' homes and offices to put even greater pressure on them.

In Spain, the protests have seen demonstators placing stickers on the doors of ruling Popular Party (PP) politicians or chanting slogans outside their offices.

"We don’t like to carry out escraches but they've left us with no other choice,” PAH lawyer Manuel San Pastor told The Local.
"Members of parliament haven’t been going to our assemblies and they've turned a blind eye to the 1.5 million signatures we've managed to collect to stop the evictions,” said the lawyer.
"It’s not something we’re doing for the fun of it," he explained.
"We came up with the idea for the escrache during our assemblies. It’s a last resort but it will always be done peacefully," he added.
Ada Colau recently justified the introduction of the use of the controversial protest tactic.
She said PAH's stance has been "too cautious" and "patient bearing in mind the aberrations we are experiencing every week".

Perhaps not surprisingly, the move has attracted widespread condemnation from politicians.

Speaking at a meeting of the top brass of the PP recently, Rajoy said: "These days we see that many of our party comrades are being harassed. We have seen episodes of intimidation or verbal abuse towards them, and what is worse, to their families."

"Nobody deserves to be harassed, vilified, threatened or intimidated," the Spanish Prime Minister said.

At a party rally on Saturday, the Secretary-General of the PP María Dolores de Cospedal labelled "escraches" as “pure Nazism”.
They were akin to the “totalitarian, sectarian spirit” of 1930s Spain, said Rajoy's deputy.
She added that though the protestors’ demands may be “very respectable and defensible, everything loses its meaning when they use violence to obtain it”.
Perhaps the most extreme reaction to the escraches, however, came from Sigfrid Soria, en ex-PP deputy from the regional parliament of the Canary Islands.
Recently, Soria sent out a number of tweets targeting the people carrying out "escraches".
In one of these, he wrote: "If a perroflauta (hippy) harasses me in the street, intimidates me or attacks me, he won't believe how hard I've hit him."
He added: "On top of that, if any hippy attacked one of my daughters, I'd rip his head off."
The political trade union Manos Limpias which represents public services in Spain announced on Tuesday they would take Ada Colau to court as she is the figurehead behind the "escrache" protests.
They say she is responsible for threats and coercion associated with the tactic.
But members of the PAH said recently they would not back down.

They said their cause was a question of "human rights" and that "there are lives in play".

They also said any politician who opposed February's public initiative could be the target of an escrache-style protest. 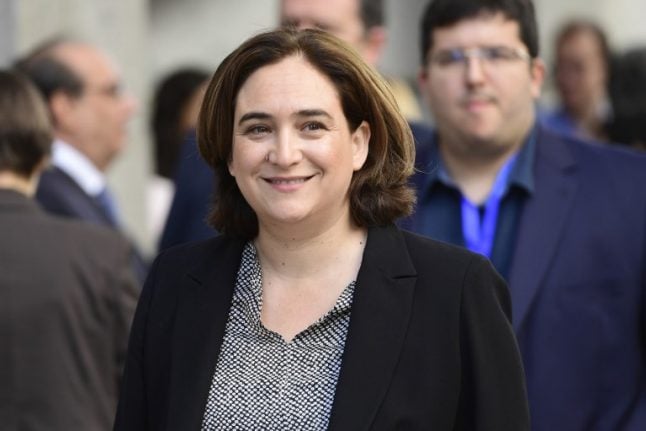